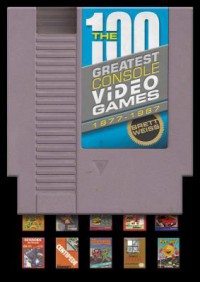 I think one of the gems of this particular compilation of greatest console video games is the fact it details some of the background creation and facts surrounding the games released in this span of ten years. I ended up learning much about games that were created somewhat before my generation (I was born in 1984, and while I was able to play some of the games in this list as a child, many of those listed were new to me, and an apt history lesson for this avid retrogamer.) Weiss compiles his own personal list of the greatest console games of the time, spanning Atari systems, NES, Intellivision, among other consoles. There's a preference towards shooter and arcade style games versus RPG, but many of these are classics in their own right (Super Mario Bros, Mario Bros, Castlevania, Pac-Man, etc.), and I definitely saw a number of titles that were obvious precursory games that inspired cult classic titles for other platforms ("Spy Games", the racing shooter game, seemed to me to be a big influence for the early 90s cult classic PC game "MegaRace.")

I really enjoyed reading this collection, and while I wish there were more titles I recognized that made the top 100 (or 200 - I was excited to see Excitebike at least in the second 100), it made for an enlightening, fun, and informative collection. I'd definitely like to see what other lists Weiss comes up with that are in later years spanning this, just to see other factual tidbits and histories behind the games.