Review: Zombies vs. Unicorns by Holly Black and Justine Larbalestier 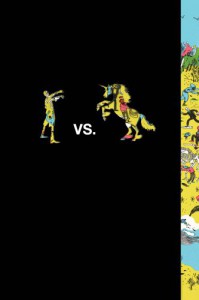 Initial reaction: This was a fun anthology, and I didn't expect to enjoy it as much as I did, overall. I listened to the audiobook version which had Justine Larbalestier and Holly Black trading witty banter about which was better: zombies or unicorns. Judging from the assortment of stories here, it's safe to say I'm firmly Team Zombie (though I'll admit the end tally was rather close). Most of the stories here were rather engaging and entertaining on the whole, though there were a few that either left me scratching my head or cringing at the ick factor, and not in the sense of gore.

It's been a while since I've picked up "Zombies and Unicorns", but I can wholeheartedly say I liked the collection for what it offered, for the most part. Justine Larbalestier and Holly Black lead the collection of 12 stories that is supposed to answer the titular reference for preference: Zombies or Unicorns?

I asked my sister about her preference, and her look summed up something of disbelief and "WTF did that come from?" She chose neither, but then I told her about the collection, and how the stories came across. She didn't seem to think the two had anything to do with each other, but I figure that's the randomness of it all. At first she was thinking of the Lisa Frank stationery kind of unicorn, but then she thought about it and said "Ooh, Unicorns can be evil too!" And we had a fun discussion over it.

I thought the banter between Black and Larbalestier at the beginning was funny, I don't know if it had to be in front of every piece contained in this. It was a little distracting, but honestly, I don't knock it much because this collection ended up being a lot of fun for the most part. I took it in stride.

Zombies barely edged out over Unicorns for me in terms of story preferences of a tally of about 5-3. Which means out of the stories that I liked from this collection, I liked 8/12. That's not too bad. The text narrative is good, but for me, the fun came with listening to a who's who of various audio narrators through the collection - including Nick Poedhl, Julia Whelan, Kate Rudd, Nick Gigante, among others. I almost wish that they could've introduced the audio narrator before each piece, though I recognized many of them just for the measure of having heard them through other narrations. The problem though with listening to the audio is that if you go back to reflect about it later, you don't have the references to make to the stories without having to backtrack and listen to them. So for crafting this review, I got the hard copy (and technically, I read this twice through - still enjoyed it both times.)

Garth Nix leads the start of the collection with "The Highest Justice" - where a princess brings her undead mother home to her father, the king, in a tale of dark vengeance. I liked the story, definitely could see it as being a full novel, but I think it ended before it really began. It was kind of a combination of a unicorn story and zombie story, so...technically you could make a case for it, but the unicorn was the focus. I'd give it 3/5 stars on its own consideration. Not enough to enthrall me for Team Unicorn though.

Alaya Dawn Johnson has the next story with "Love Will Tear Us Apart" - it was funny, the music/pop culture references were cool, it was...dude, this story was just awesome.

I'll admit I knew this was going to be a great story when I read this passage among others in the beginning of the narrative:

"And what if he—I mean “it”—were really hot? Tall and lanky and weirdly well muscled, with bright blue eyes and ginger hair? So, he smells like the best meal you’ve ever eaten, but you kind of want to bone him too. Can’t have it both ways. You aren’t a necro. But a boy’s got to eat—maybe you could just nibble a bit at the edges? A part he won’t miss, and then fuck the rest of him. Eat an arm or something. He can still fuck with one arm. Not that well, though. Probably wouldn’t like it. Okay, a hand. Who ever needed a left hand? Then you remember that Jack—that’s his name, the mac and cheese—plays lacrosse. That’s probably where he got all those yummy muscles. You need two hands for lacrosse."

This is the perspective of a zombie boy crushing on a human boy. How's that for sexual tension?

I'll admit I gushed a bit after reading Jack and Grayson's story, and the audio narrator did a nice job. It was a zombie love story that actually worked. I'd definitely like to see Johnson do more stories like this in the future, and it worked very well even stand alone in its short form. 4.5/5 stars, and point one for Team Zombie.

Naomi Novik's "Purity Test" was very funny. Naomi is a girl who comes across a unicorn named Belcazar with a scattered mind. The unicorn needs her help. The two are snarky and just a perfect fit for banter. This is just one example of the humor, but not the only one in the story:

“Where did you come from, anyway? Like, Fairyland or something?”

The unicorn turned its head and gave her a blue-eyed glare. “Yes. Fairyland,” it said, dripping sarcasm. “Fairyland, where the fairies and the unicorns play, and never is heard a discouraging—”

“Okay, okay, jeez,” she said. “Do you want me to buy you an apple or something? Would that make you less cranky?"

I enjoyed the narrative, it was fun throughout. 4/5 stars, and point 1 for Team Unicorn.

Carrie Ryan's "Bougainvillea" impressed me, much like the narratives I've read from her in previous terms. It returns to zombie territory, depicting a Venezuelan girl named Iza who lives in a world where zombies (in this world, they're called the Mudo) are an overwhelming threat. And there are pirates. And she has a very powerful father. The worldbuilding in this is very solid, and I'll admit it engaged me from beginning to end. I'd give this 4.5/5 stars, and award a point to Team Zombie.

Honestly, Margo Lanagan's "A Thousand Flowers" did nothing for me. It's a rather freaky unicorn story, and I remember the audio narrator for it was okay, but I didn't really like the nature of it all that much. Probably 2/5 stars, and no points for Team Unicorn on this story.

Maureen Johnston's "The Children of the Revolution" was both humorous (to me anyway) and freaky at the same time. This is why you don't mess with zombie children. They will take a bite out of you, and shuffle along like no one's business. I laughed but at the same time, my reaction was akin to "WHAAAA?" Especially by the end. 4/5 stars and a definitely creepy point to Team Zombie.

Diana Peterfund's "The Care and Feeding of Your Killer Baby Unicorn was quite cool. I think the initial reaction I had to this story was "Killer Baby Unicorn? Sign me up!" But it tells of a girl who takes a baby unicorn from her violent mother, and despite her lineage as a unicorn hunter, she takes care of it. A bit on the longish side for the narrative, to the point where it dragged in places, but I enjoyed it for what it offered. Probably about 3.5/5 stars, and a solid point for Team Unicorn.

Scott Westerfeld's "Inoculata" was another of the stories I enjoyed in the collection, also GLBT themed. Protagonist gets worried about turning into a zombie after getting shared blood from Kalyn, but with the potential for living forever. I enjoyed the characters and the scenario, thought the world and circumstances were built quite nicely. 4/5 stars, and an awesome point for Team Zombie.

Meg Cabot's "Princess Prettypants" had solid characters and enjoyable storyline for what it offered. A girl gets a unicorn for her birthday from her aunt while everything isn't going right. But when a friend's in trouble, who you gonna call? Princess Prettypants to the rescue, of course. I thought it was fun. 3.5/5 stars, and a solid point for Team Unicorn.

Cassie Clare's "Cold Hands" was okay. This is really the only story I didn't remember much about other than the fact that it was just okay for the moment. 2/5 stars. Probably the weaker selections from Team Zombie. On the other hand, the following story, "The Third Virgin" by Kathleen Duey was so much worse. I remember Nick Poedhl's narration for it was decent, but the story was messed up. A unicorn killing infants? Seriously? No, thank you. Only reason it gets a generous 1.5/5 from me is because of the audio. No points for either Team Zombie or Unicorn for these stories.

Finally, Libba Bray's "Prom Night" was a decent, bleak finisher for the collection, and I remember liking it well enough. I'd give it a point for Team Zombie, but probably 3/5 for the actual impression.

Overall, worth the time taken, though it had its share of hits and misses.

Overall: 4/5 stars for the collection.