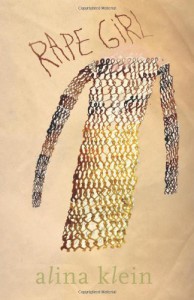 "Rape Girl" is a relatively short read with a lot of impact on its respective subject matter. I'll admit I read this book inside an hour (it was around 100 some pages in my galley) and it hit me emotionally with quite a few turns, though there were some issues with it.

From the beginning of the narrative, you recognize that Valerie is a victim of rape, but the unfolding story focuses on what happened in the before and after. There's a brief exchange of Before/After incident narratives before the story returns to the present and steamrolls from there. You see the main character accounting for her story - the police involvement, the rape kit, the backlash and support from her peers. Valerie deals with fears that are both internal and external in the aftermath, and the backlash against her from people who once called her friends is very real. I appreciated that this narrative dealt with the reality of the perceptions and misconceptions put against people who are raped, specifically women who are raped, because in the unfolding scheme of rape culture - these viewpoints and stereotypes are very real.

It's a starting point that I think the audience that it's aimed for would be able to take something from, though I don't know if the narrative was nearly as intimate enough for it to have more impact than it did. I was missing the deep POV from this in places though I understood the difficult emotional place that the main character was. It certainly touched on a lot of arguments in the issues, but the characters themselves still felt at an arms length for their respective roles. The best friend that distanced herself from Val (Mimi), the boy who raped her (Adam - and I thought the scene at the end where she confronts and condemns what he did was potent in itself), the mother who's torn between her own issues and helping her daughter. Many of these characters (and more) could've had a bit more intimacy to bring their characters home more.

It's not the strongest, most intimate narrative I've read on this subject matter, but I think not only was it incredibly brave of the author to write this piece (as a survivor herself), but I also think this is a good starting point for dialogue about the matter, especially for young adults. I just wish it'd had a little more character intimacy, not just for the main character's perspective, but the development of the surrounding cast as well.

Note: I received this as an ARC from NetGalley, from the publisher namelos.