Review: "The Girl the Sea Gave Back" by Adrienne Young 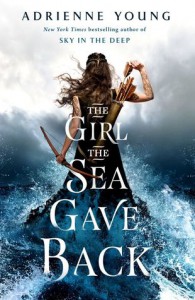 Iniital reaction: I really enjoyed this story, namely for the stakes in the story, the action scenes, and the intrigue of the lore.

My first full book finished for the start of 2020, and this ended up being a solid read for me. I'd probably rank it only slightly below the author's debut novel "Sky in the Deep" as far as how much it intrigued me and immersed me through the read. The story follows two protagonists, the first of which is Tova, a young woman who can see the future among the runes she carries. She's taken in by a group called the Svell after being found on a half burned boat and taken in for the value of her abilities. But she's been used by the Svell much of her life and as war clashes between the Svell and a sworn enemy, she finds herself in the middle of the crosshairs with a series of bitter losses. She tries to do the best she can with her abilities and willingness to do the right thing, but with what she feels is a cursed existence, Kova finds herself lost in the fray. Enter Halvard, a young warrior who's attempting to find his own way and gets caught thrown into the tides of battle. Both Tova and Halvard's fates are destined to meet and intertwine, but it's not without heavy losses along the way.

What I really enjoyed throughout this novel were the action sequences and really the dynamic of the relationships Tova and Halvard had among their respective groups. I felt the writing for the action scenes were well written and paced throughout the book, immersing me into the battle sequences as they unfolded. Tova's willingness to help those around her, yet feeling helpless with her role and overarching missing identity was palpable. Likewise, Halvard wanting to protect his family and loved ones alongside finding his own purpose was something I could see through the narrative. Where the narrative faltered fell more on developing the leads with a deeper connection to themselves as well as their overarching journeys. I could sense the book rushing towards its conclusion without necessarily tying those threads together and giving Tova and Halvard more character connectivity to make their chemistry and intertwined fates more realistic and immersive. The novel certainly circled back to the feeling of identity on Tova's end and related to the title towards the conclusion, but it still left me wanting more to see where the characters would go from here on out.

This book takes place many years before/is a prequel of sorts to "Sky in the Deep" and features the reappearance of characters from that novel, though they are only in minor roles in the book. I liked "The Girl the Sea Gave Back" for what it offered and found it a valuable read. Still, there were steps that could have been taken to deepen the experience and round out the story better than it was. I'm looking forward to seeing where Young takes this universe in the future and reading more from the author as well.