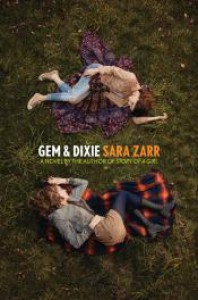 Quick review for a quick read. Another emotional and engaging read from Sara Zarr. "Gem and Dixie" is a story of sisters as well as knowing when to let go and grow. I enjoyed the journey, though the story had more compelling points in certain turns than others. It got a little muddled in the middle trying to march itself towards the ending, but still pulled at my heartstrings for showcasing the relationship between the characters.

Gem is four years older than Dixie and has been tasked as the responsible figure in a complicated household. Gem and Dixie's father is often absent from their lives, and usually when he returns, it's never for good reasons. Their mother can barely keep food on the table and while she's present in their lives keeps her own distance from taking on responsibility due to a number of vices. Gem has always tried to help and protect her younger sister, but even as they've grown older, their relationship has become more distant, with Dixie wanting to hold on to memories they used to have while Gem is ready for something more, something better.

The two have a rather unique opportunity to get away when their father returns to their lives, leaving a questionable amount of money of undetermined source under the bed. Gem asks Dixie to get away for a short time - just to "let loose". But their journey from that point is a series of encounters that have the girls meeting mishaps and discovering each other in a way they hadn't had opportunities to do before. I think the first half of the novel had me in its compelling portrait of the girls' broken home, while the latter part had some moments of emotional connectivity, but the pacing and grip loosened a bit up until closer to the end when the girls have to face the reality of their situation and Gem has to make a decision for herself rather than for the inclusion of her and her sister. In the end, it's a solid read - probably not my personal favorite from the author, but well included among her potent stories in contemporary YA and dealing with difficult issues. Wonderful audio narration by Julia Whelan as well.