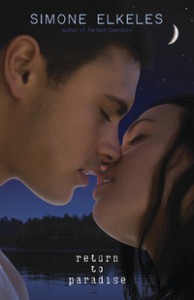 My first official read of 2017 (though technically speaking I started this last year). My overall impression is that this narrative had some good points and some very bad points (keywords: rampant cliches and overly drawn out drama), but overall left a neutral impression on me. I think once the story got back to the main plot conflicts, I found a path to follow through the novel to the very end. Plus the audiobook narration was very good on the parts of Elizabeth Cottie as Maggie, and Nicholas Mondetti as Caleb.

"Return to Paradise" begins a little bit where "Leaving Paradise" left off, and finds Caleb and Maggie reuniting in a by-chance scenario. Caleb's gotten in trouble with the law again, and under his parole officer's wing, finds himself traveling with a group speaking to different kid/teen groups about how he ended up in prison/getting in trouble with the law and how it changed his life, in addition to having to stay at a campsite for a time. Conversely, Maggie travels with that same group talking about her experiences and how she ended up with her life-changing injuries. Suffice to say - Caleb and Maggie having to actively tell two sides of the same story is awkward and creates tension between them given their history. Caleb did a complete progress reversal of character of sorts since the last novel. He became worse for wear - being physically/mentally/emotionally abrasive - with Maggie being fully subjected to that abuse and lashing out. I hate romances like this, because it's like "Dude, Maggie was hurt because of circumstances that you were a part of, can you be more selfish and manipulative with your affection/possession/jealousy of her?"

I started following the narrative better after two things happened: 1. When the cat was let out of the bag with regards to the accident's events and 2. when the book actually got back to Paradise, with Caleb and Maggie both having to wrestle with how people in Paradise had changed since they'd been away. I appreciated the attention on the family conflicts and relationships, with a keen eye on the difficulties of starting over. Yet I almost feel like things in this novel were too easily resolved with respect to the central conflict in the way it was presented. Not that I couldn't believe that this could/would happen with both families having to come to terms with the truth of events, but it was the way it was presented. I found that I liked some of the supporting cast of characters in the book, but feel like they still primarily served as catalysts for the relationship between the protagonists of the novel.

Overall, it's not one of my favorite series depicting this kind of subject matter with the romantic inclinations, but I was still able to appreciate parts of it.