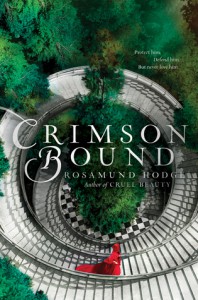 Initial reaction: I feel about this book the same way I felt about "Cruel Beauty". Wonderful ideas, action, and intriguing characterization, but the execution of it feels a bit flawed. This book dragged for me much longer than I thought it would, sadly, though I liked parts of it.

Full confession: I feel bad about not being completely enamored by Rosamund Hodge's fairy tale universes: first with the alternate take of Beauty and the Beast with "Cruel Beauty" and now the smorgasbord tale of Little Red Riding Hood blended with The Girl With No Hands and other stories that was shown in "Crimson Bound". "Crimson Bound" had the kind of story that should've swept me off my feet and fully immersed me, yet there were times it did and others that left me cold.

The story revolves around Rachelle, a young woman who used to be an apprentice under her aunt, training to protect her village from the dark forces of the forest beyond. Yet after a series of events, Rachelle becomes cursed - a murderess cursed to die by the hands of the Devourer. She tries to right her wrongs by becoming a hand of the King, swearing to kill the Devourer in a quest of vengeance. Yet, as Rachelle becomes tasked to protect the King's son Armand, she ends up being swept into another journey that's intricately tied to her own, whether she realizes it or not.

I liked the fact that Rachelle was a dark heroine with a balance of moments where you could root for her and others where she was completely ruthless, but there was something missing to her character that didn't make me fully sink my teeth into her experience. Same with the side characters - I saw how they were constructed and their role in the story, but they didn't make strong impressions on me. There were some nice twists and scenes of action in this tale, but I felt the whole of the novel, despite a bit stronger building of the world and realm than "Cruel Beauty", really didn't make as much of an impression on me as I'd hoped. The plot dragged on for far too long, leaving me having to muscle through the book in points where it meandered just as thickly as the forests the text described in the illusions. I definitely appreciated moments of it, but others I kept wondering when it would hit the ground running to the reveals. The romance never struck me that well (and I could argue that I was more taken by the fantasy realm in this series of books by Hodge than I ever was with the romances, because they lacked depth for me).

It's hard to say, because I like the illusionary world and dark tones of Hodge's works (and ultimately, that's what keeps me wanting to read her books), but I wish there were more root and streamlined focus in the works themselves, to smooth over some of the rough edges of what are otherwise fascinating tales. Good audio reading and intrigue, but still lacking that spark to fully draw me into the tale, unfortunately.