Review: The Ninety Days of Genevieve 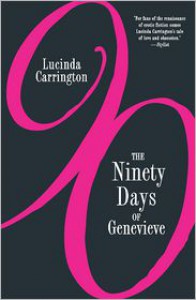 Initial reaction: I actually didn't realize this novel went back as far as it did for publishing and that it's actually a re-pub, but my biggest issue was how static the characters seemed despite some purportedly steamy scenes, alongside problematic scenes that just made my skin crawl despite reading it from a distant eye. It takes on the rather familiar premise (or was this one of the titles that shaped that particular premise - it's hard to tell) of a woman who's at the beck and call of her supervisor sensually for 90 days. As to how those following days go...I think I'd best leave that for the full review (as well as my reactions because I'm still meditating on how I feel about this). Probably a 1.5 - 2 star read overall for me, though not sure if I'll keep it at that yet.

"The Ninety Days of Genevieve" by Lucinda Carrington left me mostly with mixed emotions for a novel of its genre. I wasn't familiar with this title before I saw it listed on Harlequin's line of requests a while back, nor did I realize this was a title that was published many years ago. It might be credited with contributing to the workplace steamy alpha male boss meets submissive employee - but the overarching narrative put a cold impression on me. On one hand, it doesn't waste time in showcasing the steam factor, and I somewhat understood that Carrington was going for different fantasies and imagery in the text for erotic overt and undertones. And that's not a bad thing - different displays of imagery can be good. I remember at one point Genevieve visualizing herself as a Dominant over her boss and saying "That's progressive, at least it's recognizing a woman can not only have active fantasies about sex but also have the willingness to take the lead." Where there's a step forward in this novel however, is accompanied by moments where it takes five steps back. Way back.

One example of her judging:

"It was the first time Genevieve had actually watched women bodybuilders working out. She was surprised to see that both of these women were conventionally attractive. They had strong, muscular bodies, but their faces would not have looked out of place in a cosmetic advertisement. As she watched them straining to lift weights that would have given some men problems, she wondered why they wanted their bodies to look so unfeminine."

At one point after this, a guy shames the women whom Genevieve observes by calling them "Lezzies" (supposed to be condescending towards lesbians).

Dude...as a person from an exercise science background and who has a general appreciation for the capabilities of the human body - male or female - and knowing from experience that not all people in this field do it just to "look good" for men or that exercising is "unfeminine" - this is pretty darned ignorant and perpetuating antiquated, harmful stereotypes (which this narrative does more than once in general). Don't get me started on saying why using someone's (anyone's) sexual identity as a backhanded insult is abhorrent, because I could rage for days. Ugh. It's not just the fact this was penned in the latter 1990s, it's just crummy logic and showcasing to begin with.

But then again, it has a f-f sex scene, but part of me wondered how much of that was, well, playing to fantasy. When I reached the point where Bridget (the woman Genevieve was engaging) says “Playtime’s over...let’s go and find the men," I had my answer.

I went back and forth through this novel between saying certain ideas were interesting (but not expounded upon) and others being complete turn offs. And some of these ideas aren't bad, it's just nothing was done with them and there wasn't a human or sensual connection - just jaggedly presented scenes of varying quality one after the other. The other scenes between with the problematic turns threw me out of the book for how shallow and inaccurate they were, mostly through Genevieve's pampered and overly privileged lens.

In the end, while I'm giving this 1.5 stars at the most, I can't say I would recommend "The Ninety Days of Genevieve" - too immature and lacking direction for my preference, but maybe I need to read another book by Carrington to see what more of her style is like. I don't know. We'll see.