Review: The Devil You Know by Trish Doller 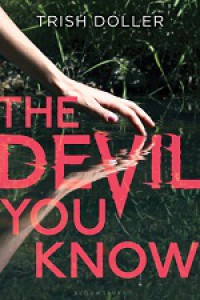 Initial reaction: Are you freaking kidding me? What part of this was a good book, I'd honestly like to know. It was incredibly awkward, lacking suspense, and I hated the main character's complete senselessness and stupidity. I can understand characters making stupid decisions, I can also understand that the character is a teenager who may be completely oblivious to the scenario around her, but ye Gods, this was just...a complete waste of time.

I was going to wait a night to write this, but I think I can expound on my thoughts properly since it upset me enough. Suffice to say, I (quite strongly) didn't like this book and I found it difficult to find any redeeming factors. Which is unfortunate because not only was I looking forward to a decent mystery/thriller/suspense, but I also found something to like in my last read from the author. I could almost forgive the fact that both heroines (both this and "Where the Stars Still Shine") in Doller's books are self-absorbed and act in ways that aren't so wise, but this ultimately culminated in a suspense thriller that proved to be a waste of time because everything was so unflinchingly awkward and obvious.

I'll admit that I followed the book along for a time because it's an easy read - very fluid prose for the most part. But Arcadia (Cadie) is a heroine that grates not necessarily because she's spontaneous and awkward (with a fair share of awkwardly humored moments in the text), but that she makes very obvious ill choices which are paint by numbers tedious and predictable. The story starts out with Cadie deciding to take some "me" time out for herself considering she's been taking care of her father and younger sibling since her mother died from cancer. Cadie decides to hop on a spontaneous road trip with two guys she just met and a friend whom she'd lost touch with some time before. The characterization development seems to progressively build, and at the very least (at the start) it would shape up to be a good way to know the characters and their quirks. Cadie herself is spontaneous in her voice and quite awkward. There were moments I was close to getting behind her in the beginning, but as the narrative wore on (to the point where it was tedious even with trying to establish chemistry with Noah and Matt), her purposeful cluelessness grated on me.

She doesn't think much about the odd man who suddenly went missing that ended up on the news (and later dead).

She doesn't think much about the fact that her friend - who was excited about taking a trip to Disney World - deciding to bail all of a sudden (and the poor friend is subsequently forgotten about through the rest of the narrative until a certain revelation).

She doesn't think that much about not contacting her father (though I understood this was rebellious on her part, it still felt odd since purposely thought in points "I should call him even with everything going on...").

In truth, Cadie just didn't think at all. Not until the last possible moment despite the warning signs being right in her face. I saw where this was going and it held no suspense for me. Plus, the characters themselves didn't feel that dimensional when it was all said and done. I couldn't even really think of it as steamy or sexy (granted, I couldn't find Cadie's losing her virginity in a graveyard sexy - but I was trying so hard to forgive things in this that I felt were just plain awkward in transition and translation, despite some notably intentional references to awkward dialogue and humor).

By the ending, I was just done. I got the fact that some of it was meant to be an homage and parody (to an extent), but it just failed miserably to me. I honestly wouldn't recommend it and I thought "Where the Stars Still Shine" was a much better effort than this. Very disappointed.