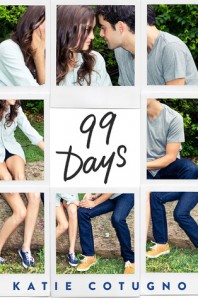 Quick review for a not-so quick read, but to me was still worth the time. Oh, how the heck am I going to expound upon this book? It's a hard sell and I understand the range of emotions as to how people whether really liked it or absolutely loathed the experience of reading it. The pretty cover on my edition of this book will fool you. You come in thinking that this might be a happy-go-lucky novel of relationships, but then you read the blurb and the collective story and think "THIS IS NOT LIGHT AND FLUFFY! THAT COVER'S LIGHT AND FLUFFY, DANGNABIT!!!"

So if you're looking for something lighthearted or with swoon worthy characters, please exit off the monorail to the right right now because that's not happening with this novel.

My jests aside, notice if you're reading my tags/shelves for this book that I'm not putting this as a romance novel. I absolutely refuse to. It's not a romance novel as much as it is a relationship novel with tough leanings, and I'll at least give Cotugno credit for dealing with a pretty taboo subject matter in a responsible way, even if multiple characters' actions weren't anywhere near responsible for the scheme of events that occurred in "99 Days."

I'll admit two things upfront for you guys before I dive into this review fully:

1. I do not typically like novels with cheating relationships. I rather detest them because more often than not, quite many a time in the scheme of romance novels, they're not treated with the gravity/weight/repercussions that they have in real life. There's always this thing where people say "Oh she was better with the guy she cheated on anyway, it's okay just because he's hot/cute/sexy/whatever" justification that makes the moral transgression less significant and focus more on the romantic ship. Not to mention, the difficult emotions and relationships are dropped faster than a blink in favor for the HEA.

I find that stereotypical portrayal to be full of B.S., because cheating is a real thing and with respect to relationships: it HURTS. (I don't know about this kind of thing personally, but I've known people who've gone through the emotional gauntlet and aftermath of it.) But - and this is a caveated "but" - I can read it to an extent when I can see the way it affects the characters contained within and when the gravity of the situations and people involved comes across. I can also read it when the characters are fully developed/realized and I can figure out what they're thinking and feeling in the scheme of the decisions they make and such.

2. I can read novels about unlikable characters and their actions/relationships if the narrative has a strong enough pull and immersion where I can say "Okay, I understand why the POV character and the supporting characters think and feel the way they do." Personal relationships are complex in terms of understanding and watching them unfold, so only examining them in a single handed/dimensioned way - to me - undervalues the experience. It is especially undervaluing if it's notably skewed to a certain POV, rather than the actual relationships and build in the novel itself.

That being said, my experience with Cotugno's "99 Days" was fair. I won't say I enjoyed this novel, but I did appreciate it because it's rare that I see a YA novel go "there" when it comes to portraying relationships of this measure. Reading the situations felt like pulling teeth at times, but with the reality of the situation itself, that was pretty much a given.

To the novel's premise, Molly has 99 days before she has to go to college, and she's forced to go back to the hometown she left behind where she's been branded a social outcast. Reason? She was involved with a guy (Patrick), was dumped by said guy, and ended up having a one-night stand with said guy's brother (Gabe). She does not tell Patrick that she slept with guy, but Molly's mother decides - after her daughter confesses to the whole mess - to use the situation as fuel to write a bestselling novel.

And Molly's secrets are secrets no more. She's branded as a "slut" and relentlessly bullied and shamed into silence and hiding (which led to her stint in boarding school).

Suffice to say, Molly does not get a welcome homecoming, at least not by her former best friends - one who is the sister to the brothers, and the other who was going through her own personal pains and was subsequently abandoned by Molly when she abruptly left town.

Molly is a selfish, conceited brat. Don't get me wrong. That's her fatal flaw. I didn't like her, didn't respect the decisions she made, wanted to throw her out with the bathwater several times as I read her perspective and watched her fall into similar situations that she described being a part of previously. I knew this, but I did vividly watch her experiences, affections, and somewhat coming to terms here. She's a young woman, but very naive and careless with her relationships. I don't know if her coming to terms was as grounded, developed, and progressive as it could've been, but I saw it.

I equally raged at Gabe and Patrick's actions (because they used Molly for their own motivations/conflicts, but I don't know if that was as focused upon as Molly's experiences because they weren't front and center.) I liked that the narrative did expound on the unfair blame game that women often get subjected to in this measure, as well as the bullying and inner dialogue of guilt and examination of relationship complications, but I feel like that message was somewhat lost in the scheme of events in this novel, especially with Molly pretty much not learning from her mistakes until yet another crash and burn situation occurred. For what it's worth, though, Cotugno does deal with the realism of the situation, rather than glossing over it for a certain "ship" or formula that would remove the weight of the emotions of people involved in it, including Molly herself.

I feel like this could've been a fuller novel than what it was, though. I appreciated the attempt of what it aimed for, but didn't particularly care for how it was executed, and that's probably what has me sitting right on the fence. I valued the time taken for this, but at the same time - I feel like the way it came across didn't really make the most of the subject matter, especially considering the weight of it.