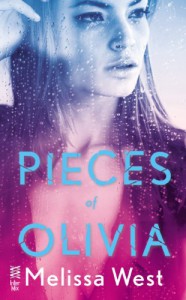 Initial reaction: It was a decently written narrative, and the strength of the characters apart from some of the cliches were what made this stand out to me. But it still had issues to me that I didn't really care that much for.

For my first read from Melissa West, this actually was a decent narrative when I juxtapose it with about 90% of what New Adult offers up, and it surprised me. The characterizations in this are memorable and vivid, the college environment is set up very well (it makes sense that the author knows South Carolina), and there are genuinely humorous moments peppered between some tough coming to terms for the female protagonist. This book had me in several places and I admitted I enjoyed the moments it offered.

So why the 2 stars? The plot paint by numbers formula would be one thing, the handling of the reveal towards the end (which I saw coming, but I wondered how it would handle the measure) would be another. Not to mention the quirky therapist set me the wrong way. I can usually never completely get behind supposed quirky therapist characters in this genre (see my review of "Ten Tiny Breaths"/"One Tiny Lie") because there's always something about it that trivializes the severity and gravity of mental illness or jarring events that change one's life. Rose actually wasn't a bad character (and hey, I wanted to like her because she's got my namesake!), but while I could be behind some of her interactions with Olivia, I didn't necessarily always like the route taken.

Before I go too far, let me recap: this is about a young woman named Olivia who transfers from Columbia U to the College of Charleston, SC after a horrific incident that leaves her scarred in more ways than one. She meets her new roommate Kara (and indeed, I liked Olivia's chemistry with Kara) alongside crushing on Kara's best friend, Preston. Preston has moments when he's mischevious and funny, and I liked him initially too. The plot toggles between Olivia trying to come to terms with a horrific loss and secrets she keeps inside, but also coping with her relationships at school, her parents and their wishes for her, and her romance with Preston - which seems like a conflict of interest from the get go, but builds upon itself as the narrative goes on. I won't spoil the overarching reveal, but seriously? You can guess it after a time.

What made this narrative stand out to me were the characters. Their voices, issues, ideals, just in general getting a much needed deep POV set. I got into Olivia's head well in the scope of this narrative. I liked how assertive she was (thank goodness, because so many NA female leads are so achingly passive, it's unrealistic). She knows what she wants and doesn't want - though there are moments when she lapses because of the pain she's dealing with. I liked how the narrative handled Olivia's grief as well - it felt palpable for the events and losses that came across. The personal messages and expansions were a nice touch. The psychological trials she goes through feel vivid and I liked how the narrative progressed with respect to that shown in and of itself.

The chemistry between Olivia and Preston was decent, enough for me to get behind even when there were moments that felt too genre familiar. Even Kara's friendship was less cut throat for Olivia's experiences and more on the side of mutual understanding. Seeing the family interactions and aims of the characters was a nice touch as well.

There are caveats to this narrative, though - and I debated in my head the longest time with it because despite this book knocking some cliches down, it builds others up just as much as other titles among its peers.

Rose left me conflicted, because there were pertinent moments in Olivia's bargaining that she was actually helpful. And I did like one moment when it seemed like Olivia shot Rose down for trying to manipulate events for an ideal reunion after having quite the spat with Preston (hint: it has to do with a long guarded secret through the narrative). But other moments, Rose had me scratching my head for some of her commentary. I still don't understand how she could assert that people who lie are somehow more intelligent than those who don't. *shakes head* Maybe she meant to say that lying takes creativity? No idea. Seriously, I have no idea.

The whole reveal of Preston's past relations and such was so sketch that it really threw me out of the book with the way it was presented. Olivia, I imagined, wouldn't take well to the news. Understandable. I guessed that even before the reveal came about. Didn't expect the transition and acceptance of matters to be that jarring, though. =/

Overall, it was just an okay narrative. Very heavy with NA cliches, and formulaic, but much better written than most in this genre. I still didn't love the narrative, though, and even when the characters were strongly asserted, they still really had little distinction compared to narratives that aren't so formulaic.