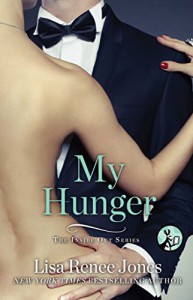 Quick review for a quick read. I think I still have issues with Mark's narrative voice, but on the whole - this was a better novella in the "Inside Out" series than "The Master Undone", at least as far as the ones I've read.

This narrative takes place during the time of the third book, so fair warning for spoilers. Mark's still dealing with his attraction to Crystal, and yet juggling his mother's cancer diagnosis (which my heart kind of hurts because I keep picking up narratives that remind me of my recent loss, but I digress). This narrative feels more relevant on a few levels for symbolism. "My Hunger" could mean Mark's inability to let Rebecca go and his pains in missing her as the case details unfold. It could also mean Mark's need for control in his respective situations, such as in his relationship with Crystal or his yearning to return to his D/s type relationships or controlling the press as things start breaking down for the investigation into Rebecca's death as well as the corruption in Mark's business. It could mean his growing desire for Crystal as she's breaking down his usual habits.

There's a lot going on, with Ava being in the middle of the accusations in the case. Mark's trying to save face in the accusations leveled against him and Sara in Rebecca's death. I'll admit that to me it still doesn't make a whole heck much sense considering the details of the case, but I'm still following it to see where it goes. I'll admit it's hard to feel invested when it seemed like one plot thread was solved and another decides to blow wide open because of contradiction. That could either be a brilliant twist or a plot hole blown wide open.

Mark's narration was a little better in this - and the intensity in his assertions and desperation with everything going on is warranted. Something about it still feels awkward, and I can't place it for details. I liked the story, don't get me wrong, but the devil's in the details here - it seems like it's setting up a massive conflict with Mark in the center, but I'm wondering if it's not just opening a whole bunch more for plot points only to be unresolved/untied.

The novella leaves off on a note with Mark's distancing, with a vow he'll do so for good with respect to his relationship with Crystal. Crystal's character has been okay so far, but I still feel like she's at a distance in the narrative.

I think I'll wait until reading the next novella to see where this one ends up. Hopefully with some more expansions/reveals to be had.

Note: I received this as an ARC from NetGalley, from Pocket Star.