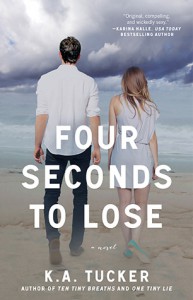 Changed my mind, I'll probably finish this out to the rest of the series, but I'm still not hooked because of so many problems with the narrative in measures. Hopefully I can expound on that in this review shortly.

Kidding. =P I figure I'd start this review on something of a lighthearted note because this is going to be a tough review, and by tough I mean...I don't like writing this, but I feel I have to be honest.

I'm still finding myself following K.A. Tucker's narratives despite my better judgment. "Ten Tiny Breaths" I had so many issues with I still don't like thinking on it, "One Tiny Lie" was probably the closest to the narratives in this series that I actually liked for a time, but at some point it derailed and went towards the familiar tropes which really didn't strike me well for the way it handled that progression. And I wasn't here for the sexual assault/harassment among other problematic depictions in this book, long story short. I found some of them to be triggering for me personally and that had a hand in one of my first adverse gut reactions to this book. Thankfully, I read it a second time through to give it another chance and see if it was depicted realistically and not gratuitously, but I don't think the second time around went much better than the first.

"Sal didn’t rape me in the traditional sense, as surprising as that is, given everything else he did to me. Sometimes I still get flashes of his rough, callused hands as they delved into my body. When I didn’t react—not a sound, not a tear, even when I should have cried out from the pain—I guess he got bored. Like a cat batting around a mouse that doesn’t run. He called me a cold bitch and turned his back on me to check the delivery, giving me time to pull my pants back up. At the time, I was relieved that he let me go without taking full advantage. Most men would have."

“Come on, hurry it up,” Eddie barks. Bob’s rough hands squeeze my ass on their way up to my shirt, then under my shirt, where they linger.

Deep breaths.
I am not really here.
This will be over soon.

Though I don’t enjoy this any more than the attention to my lower region, it doesn’t jog the same horrific memories. Still, when a fingertip digs under my bra and starts sliding back and forth over my nipple—the lascivious flicker of a smile touching Bob’s lips—I decide I’ve had enough.

Then, Houston, we have some big, big problems here, and I honestly don't know if I want to go into just how much. It just saddens me for the portrayal, and I won't linger on it because I can't. I just cannot.

"Four Seconds to Lose" had two characters who were heavily indulgent in themselves and flawed to no end, but over the course of watching their journeys, the plot was...Captain Obvious. I kept waiting for the big "zing" moment and by the time I reached the end I thought "That's it? Really? Predicted that by Chapter 3...ish."

I suppose for the genre, this isn't really straying from the formula so maybe I expect too much from this genre doing SOMETHING different for a change. Sadly, with this narrative, it wasn't to be. Some interesting things in the set-up, but largely the execution dropped the ball.

Meet a bartender and a purported con-artist. At least that's where this book begins. You have a guy who runs a strip bar and a girl running from her past. Guy thinks girl looks like girl from his past and gets flustered when she comes in for a "job". (Meaning she strips for him, but only partially.) Girl thinks guy is hot and doesn't think twice about his hesitation other than the fact that it's job related. Things get complicated rather quickly.

Cain's actually a recurring character in this series, the owner to the bar Kacey worked at in the first book. At least I can say I got more into his head this book (for better and worse). He employs his dancers in an attempt to "save" them from rougher lives in other venues. Not a bad guy (ehh...), but it was difficult to see his character in turns past some measure of a saving grace and for some problematic references (was anyone else creeped out by the fact he thought Charlie was a 14-year old at one point?). I did like that he didn't find certain domestic abuse among other references for humor funny - he really does respect women, but I had a hard time connecting with his character - mostly because of his "obsession" with Penny.

"China" actually had more of a backstory in this book, but I can't say I was impressed or really that much more into her character taken apart from the stereotype (but at least I recognize she's more than just a placeholder character, here - not that much more likable, but meh). Ginger was so painful to watch for contribution in parts that I thought she was more of a caricature of a lesbian character than anything else. Some of the humor surrounding her character felt forced and displaced. One of the times when she made mention of saying "if I wasn't a lesbian" made me want to hurl my ereader across the room because it's like...there's not an understanding of how sexuality works here for characterization and it's blatantly obvious. And sad to me because the chance to recognize diversity would be well noted in a work for NA. (Then again... with "China" and the Native American dancer from the first book's inclusion - I didn't have much high hopes with equal portrayals.)

Charlie was hit and miss with me for character (there are a few other characters that were far, far more convincing for me in the con artist on the run note, but I'm going to avoid direct comparisons). I was so glad to see Storm/Nora in this book (I'd be an advocate of her getting her own story as she's one of the more fascinating characters in this series, but then again - I saw what happened to Livie's character and I kind of DNW. =().

The chemistry between Cain and Charlie develops gradually, but Cain is very protective of Charlie because of her insinuated similarities to the girl he lost, Penny. While we're at it, can we talk about NA stereotype #9762 - protagonists who are obsessed with dead (or supposedly dead lovers)? Is this a trend or something because I find it insanely creepy? Guy (or girl) ends up losing the love of their life in some tragic circumstance and is beside themselves. They obsess to some odd extent (Cain, in this case, has a tattoo and even named his club after said girl.) They are afraid to love again until some other prospect comes along that makes them doubt.

Or in the case of this book, she's really right there. Charlie = Penny. Little too convenient for a happy ending, if you ask me, especially given the context.

Why is this a thing? I don't understand, man.

I did find I became more invested when some of the details surrounding Charlie's past and criminal life came up, but it was still so underdeveloped (even to the point where some reveals were just ludicrous) and the characterizations in this tale so threadbare save for a few that I just couldn't get into it.

I'm going to try the next book in this series, despite the "strike three" this came across as for my experience. Seriously, I'm just going to try, but honestly - I'm still not very impressed by this series for its problematic portrayals and assertions, and that keeps me from even remotely seeing the fruits of its portrayals for romance among other things.

Note: I received this as an ARC from NetGalley, from the publisher Atria Books.