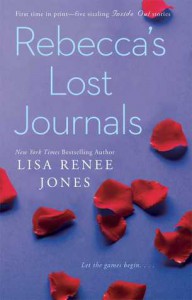 Initial reaction: Great narrative on the part of Rebecca, but Mark's felt odd in comparison.

For the most part, the compilation of "Rebecca's Lost Journals" pleasantly surprised me. This takes the short stories/novellas that were written between measures in the "Inside Out" trilogy and puts them into one volume. I would definitely recommend reading Rebecca's journals (the first four stories in this narrative) after the first book, while Mark's narrative should be read after the second book/before the third.

That said, I clearly think that the stronger narratives in this collection were on the behalf of Rebecca; thankfully her stories take up the majority of this picture. I remembered reading the Inside Out trilogy wanting to know more about her and trying to understand why Sara was so fascinated by her journals. I got my answer with reading her accounts for myself. There's an intimacy to Rebecca's perspective that made it very easy to know what she was thinking and feeling as she went from working a waitress job to her dream job as an art seller, and under the wing of her push/pull lover, Mark Compton.

Rebecca actually managed to make me chuckle a few times as I read through her entries (Double Stuffed Oreos, FTW!) and I'll admit that when she described her journey through becoming a submissive, I followed her to see the impressions it made upon her, and ultimately how she ended up having a falling out with the lifestyle because it changed her so much, to the point where she felt she became unrecognizable, even to herself. I appreciated reading it, even if in some points the situations themselves were a bit on the awkward/personal comfort zone transcending side.

I almost gave this a full 4 stars for how well it was executed and engaged me, but then the very last story dropped the ball. Mark's narrative was not needed in this - it was a waste of time. While it's true that Mark's character never fully clicked with me for various reasons (though I do admit it was more interesting following him when I didn't have his narrative perspective), I felt this was not a good representation of the character. What was the point? To show Mark engaging in another relationship with another woman who challenged him? To show his guilt over Rebecca, his need to possess in a dom/sub relationship? It just felt like the portrayal of the character in itself was inauthentic and awkward. His character voice grated on me and I just didn't care for it. It threw me out of the pull the previous stories had, and ended up concluding the narrative on a "meh" note for me.

I'd recommend this certainly for the strength of Rebecca's narratives alone, especially for those who've read the "Inside Out" trilogy, but honestly - the latter story on Mark is one you could skip and not miss much.