Review: Half Bad by Sally Green (Half Life #1) 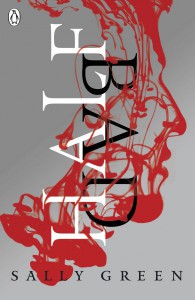 Initial reaction: I'll have to think about this one guys, because the quality of this book fluctuated from interesting to dry in many places and I struggled with the novel, but I can't say that I disliked it. I think the quality of this book might've been oversold though. I liked parts of it, but I found it also very flawed. Hopefully I can explain this after I give myself a night to sleep on it.

I'm at a loss of words to describe my experiences with Sally Green's "Half Bad," the first in her Half Life series. Not necessarily because it impressed me, but for the purported potential I'd heard this particular series had. The opening letter in my galley pretty much held that this was the "next big thing" and conveyed epic levels of excitement over its release. But after finishing this book, I honestly had to ask myself "Am I reading the same thing? Because I struggled like crazy just to get through it."

And I don't mean to undermine its contributions because there were many people who loved this novel - some among my friends and fellow readership. I think I understand why - this is a dark story with some harrowing details in places. It features a protagonist (Nathan) who from point one in the novel is an outcast and subjected to some brutal treatments and prejudices from the people surrounding him. In a society where White Witches are championed and Black Witches are seen as evil, being raised as a kid who could go either way, being a half existence with a father who's one of the most infamous of the Black Witches (Marcus), Nathan has a lot put against him. He's subjected to inhumane treatment which includes being beaten, held in a cage, getting his hand nearly dissolved off by acid, knife carvings in his skin, and betrayal by those he trusts and comes to love.

I should've loved this novel, but I'm going to tell you two primary reasons why this novel didn't work for me completely.

1. The writing/presentation. I could talk about how the presentation of this novel shortchanged it for days. The whole time, I felt like there was a barrier between me and the narrative that I could not put my finger on for the life of me - until I realized it was not only a product of emotional distance but also a distinct lack of worldbuilding. This book never completely immersed me in the world or Nathan's particular plight. I didn't so much mind or feel bothered by the switching of viewpoint - from second person to first. That I could get behind as long as it was done well. I actually didn't mind the blunt brutality the protagonist faces - because in a typical narrative, I'd be heartbroken witnessing all of the things that happened to Nathan. But the intimacy to the situations and conflict as it unfolded in the novel were greatly shortchanged. It felt clinical in places where it shouldn't have been. The narrative also had severe pacing issues that needed fixing up. I can take slow burning novels, but for a slow burn you have to pay attention to character and world intimacies, which is something the author did not do here.

I didn't lament the lack of focus on magic for a witch novel, but I wanted the author to dig more into this world/brutality that Nathan faced - to make the prejudices Nathan faced mean something rather than just tell me how he endured it. It wasn't enough - to me - to simply tell me about his purported destiny and assumptions over his identity - I wanted more from it. I wanted to *feel* it. The emotional distance in this work is something I don't understand, and I felt like it was told more to me than shown and in a presentation where I could feel in medias res. It never connected fully.

I know some people are attempting to make comparisons of this book with Harry Potter for the magic comparison/theme of witches, but honestly - my mind didn't go there immediately. This book kept giving me deja vu vibes of series like MTV's adaptation of "Teen Wolf" (because of the relationship/faction contrast that happens between Nathan and Annalise, it's very similar to what Scott and Allison's roles were for a good part of that series - one being fated to work against the other even when their affections bring them together). It also gave me deja vu vibes of Nancy Farmer's "House of the Scorpion," where the young male protagonist in that (Matt) may have had some purported promise because of who he is, but he's subjected to some brutal mistreatment and prejudices just because of his respective identity/differences from the people around him. Only I would argue Matt was a far more precocious and compelling protagonist to watch as he grew up because he had very key personality identifiers - like his curiosity, his innocence, his very quick to anger temperament at not understanding why people treated him so differently, and his loyalty to his friends and even his pain when he realized how deeply some of them betrayed him or learning of their respective pasts (such as Tam Lin's secret).

Which brings me to my next problem.

2. Nathan. Oh dear, I'm going to get flack for this, but Nathan never became the compelling narrator that I hoped he'd be. I'm sorry to say it, but he was about as bland as chalk dust for being the primary narrator of this work. I found myself far more compelled by some of the side characters, even those that didn't show up in the novel for very long (Bob was extremely charming, Gabriel was humored and conflicted - for some reason he kept reminding me of the Artful Dodger from "Oliver Twist", Rose was strange and quite creepy, and Arran was the loyal best friend).

When your surrounding cast has more compelling quirks than your protagonist - you have a problem. A very BIG problem. Nathan's eye to certain things did not pull me into his respective situation or feeling for him as much as I could've done. I understood that he was someone who had identity issues, who was cast aside by those around him for what he was born to be, for whom his familial connections were - but he never gave me a reason to root for him.

The quality of the narrative fluctuated between good showcases of tension and really plodding progression. I think towards the middle and end when Nathan makes his escape and comes across all of these different characters in an effort to search for his father, it lost its momentum very quickly. And the lackluster/cliffy ending didn't help matters much either. I was terribly disappointed at the exchange where Nathan actually meets Marcus, though there were supposed to be palpable tensions there. It felt too empty.

My hope is that with the next novel, Green can even out the presentation for this much more and delve more into the intimacies of the characters. I will read the second, but it's gotta step it up from this presentation in order to hook me. There were parts of this that had promise, I'll admit, but I was disappointed with the way it came across.