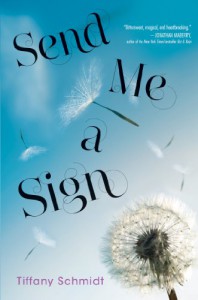 Initial reaction: This is probably one of the few books on its subject matter that, generally, I was unimpressed with the presentation for. I don't know - I'll have to think over it with the possibility of upping my rating, but I wasn't taken with it.

All right, I'll bite in discussing this book with a short and sweet review: I didn't like "Send Me A Sign" very much at all. There were very few redeeming factors about it and the protagonist came across to me as a self-centered brat whose friends came across with the same kind of bratty qualities (either that or they were *too* perfect). This book wasn't as potent as I think it aimed to be, with meandering passages and feeling so overly long that after a point, I just had a difficult time caring one way or the other.

That said, this book is one with a central focus on revealing Mia's diagnosis with cancer to her friends, family, people around her. But Mia's characters was extremely self-absorbed and I personally found it hard to sympathize with her, as well as found the relationships in the novel to be a bit contrived and outside the point of reality. I'm not going so far as to say the narrative was pretentious, because it does depict the reality of Mia going through procedure after procedure to fight against her diagnosis, and also her helplessness and isolation through it all. The high school aspects/focus were a bit pretentious though, at least with the constant media dropping (which shows it age in some respects). I understand having some music, movie, TV and other media references here and there, but in this - for me it was too much without necessarily having that much intimacy.

I don't judge Mia for not wanting to tell her friends about the diagnosis - I can understand that and the reluctance. I just...couldn't wrap my head around the fact that she was so self-centered most of the time. Her friend Guyver is the only person she tells anything about the diagnosis, though she keeps that relationship under wraps from her friends as well. I found that I couldn't really connect to the other characters for the fact that they were all stereotypical cookie cutter without much flesh. Not to mention HIGHLY judgmental. And Mia's parents don't really feel that realistic either. On one hand, I understood Mia's mother's denial, but on the other hand, for me it didn't resonate as realistic.

Things hit the fan when Mia (who takes far longer than the narrative could adequately support) reveals her diagnosis (not necessarily by choice in some measures). I wasn't surprised at the fallout, but I didn't take it to be Mia's cancer diagnosis to be the cause, but rather Mia's neglect and denial as the narrative went on.

Coupled with the meandering love triangle and taxing drama, after a point, I was just reading to see what happened in the end. I didn't care about it, I didn't feel it hit home with any kind of palpable resonation or changes. Mia was not the kind of protagonist whom you could see for flaws and redemption the way you could for the protagonists of Lauren Oliver's "If I Fall" or even Courtney Summers' "Cracked Up to Be." I didn't feel the intimacy in the perspective - it just felt like one long slog that could've been significantly edited down and had more potency and potential.

In the end, not one of the best books on its subject matter I've picked up. I think it had some moments that were sweet and realistic, but it was drowned out by the meandering plot and underdeveloped, unlikable characters.

Note: I received this as an ARC from NetGalley, from the publisher Walker Childrens.