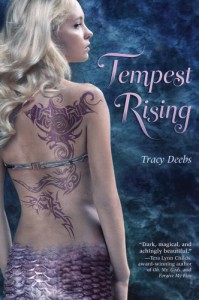 Initial reaction: Cliched, but not terrible. There were times when I followed the narrative well enough, but it's something of a predictable story. Nonetheless, I think I'm going to follow this series through to the end.

Tracy Deebs's "Tempest" series has been on my reading list for a long, long time, probably ever since the first book was released, but I just never had the opportunity to peruse it until now. I definitely have a love for stories set on the water and even mythos surrounding(which include mermaids). So I can only give myself a smack on the forehead for how long I've waited to pick up "Tempest Rising." For what it offered - it was entertaining. Very cliche, but entertaining.

I'll probably be in the minority for saying that I liked Tempest's sharp narrative voice and tone, even if I didn't always align with her perspective on things. Tempest is a young woman who is faced with turning into a mermaid as she approaches her seventeenth year. She's bitter about the change, notably she hates her mermaid lineage because she blames it for pulling her family apart. Her mother's been missing for six years, leaving behind a father who struggles to care for his three kids, including Tempest.

Tempest starts changing into her mermaid roots more with each passing day. The sea provides an irresistible call to her, she starts growing gills and webbed feet. Much of this is territory that I've already seen in other mermaid media in the YA spectrum (like the Disney movie "The Thirteenth Year"), but I'm probably more forgiving of it because while I know where it's going, the narrative kept my attention.

Tempest is a female surfer, so that was another bonus in this story, but lo and behold, she meets a mysterious guy who she feels incredibly drawn to and feel an "electric" charge with him. Never mind that Tempest already has a boyfriend with a relationship on the rocks because of what she can't tell him. I suspected that it would go in a love triangle route after a time. I couldn't help but throw up my hands after a point and say "Oh dear, here we go. I've read this story plenty of times in YA."

I think Deebs actually does a decent job with the relationships (apart from several repetitive turns of phrase, and probably more dramatic than they needed to be - "more power than I'd ever known" and things like that. There was also the love triangle, which I really think stunted this book from being more than it was). It is cliche, but it's definitely not the most painful that I've personally come across in this genre or age group.

In the end, I was actually fine with the way the relationships and revelations were handled. I did feel for Tempest when certain measures revolving around her mother's identity and such were revealed. I also really enjoyed the worldbuilding/establishment and the tensions created with respect to the world. But the love triangle/handling felt all too familiar and not done as well for the character development. It felt like it forced its hand more often than not. And not just Mark's character was shortchanged, so was Kona's. I wanted to like Kona more but he felt like a formula. The "mysterious" aide that comes out of nowhere, tells Tempest her life belongs with the sea, and he came across as too 2-D. Mark wasn't much better either, but I understood that Tempest's relationship with him was on again/off again.

I think the story had enough pull for me to see what happens in future installments, what with liking the narrative voice and world enough to continue. It's enjoyable if you are okay with knowing what to expect, but I'll admit I wasn't always okay with the familiarity, and I think it could've dialed back on the cliches.