Review: After Hours by Cara McKenna 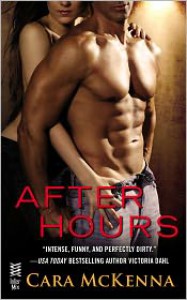 Initial reaction: Probably one of the better titles in its genre that I've read in a while. Erin works as an LPN at a ward and meets Kelly, a rough and tumble guy who works in the same place as a person who restrains patients when needed. Both have a sexual and intimate chemistry that leaps off the page, and they have very relevant issues in their lives that they deal with one step at a time. I enjoyed this and definitely want to read more from Cara McKenna in the future.

This was certainly a read that hit the spot: excellent characterizations, steamy scenes, palpable conflicts and realistic scenarios with a slight edge. All of these aspects make a good story for me, and in my first read from Cara McKenna, they were all signs that I'd enjoy this story for what it offered.

It surprised me how much I connected with both Erin and Kelly. I liked the attention to detail given to Erin's occupation and the environment she works in (given a passion that I have for health as well, I was pleased to see this). Erin has a rough first day on the job, and after sharing a drink with Kelly that night, its easy to see how their chemistry develops in something of a slow burn. Kelly's dark personality and demeanor was something I didn't expect to endear me to him. For the amount of so-called "bad boys" I've read this year, I thought I'd be turned off, but even considering his flaws, he's a guy I really liked, both in his personality factors as well as learning about his respective past. He's realistic and I'll admit I liked his humor in touches. There's not a lot you know about him in initial terms, but the narrative does a great job of developing him through the story.

Erin was a character whom I liked following as well, even noting her flaws. She's a protective elder sibling over her younger sister, who has a history with bad relationships and with a young child whose father isn't supportive. The side conflicts involving Erin's sister's storyline were realistic and I could see where the conflicts arose from there.

To the main storyline/coupling - the chemistry between Erin and Kelly was very well done. Their scenes were *steamy* - of the molten lava kind. Some of the scenes ran a little longer than I would've expected and weren't as spaced out, but I thought they were done well for the most part. The fact that these two have such intimate conversations between them, not simply of the sensual kind, was refreshing to read as well, and made them pop off the page.

In the end, I thought McKenna did a fine job with "After Hours" and I definitely want to read more of her work in the future.

Note: I received this as an ARC from NetGalley, from the publisher Intermix.