"You Can Tell Just By Looking": And 20 Other Myths about LGBT Life and People 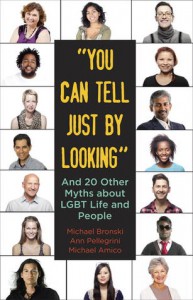 Initial reaction: I haz a soapbox, hear me roar.

(Translation: This review is too much for me to pen at 3 A.M. in the morning or thereabouts. This will be a long review, but my overarching statement was that this was not researched or presented well for the arguments it sets up. I may need to go through the text a second time to get every point of offense I can get from this text. I had so many issues on the level of generalized, global assertions, transient arguments, outright outlandish claims, and unsupported, inconclusive summaries.

I don't think this was a very good assessment of GLBT issues nor for debunking the myths that were presented in this text. I will concede that there were some spots of construction, but overall - what a disappointment. I expected much more from it.)

I have no doubt that many people who pick up this book looking for a work that articulately and accurately dispels many myths about the perceptions of GLBT life, individuals, and offers intriguing, meaningful reflections on sexual orientation will be sorely disappointed.

I know I was, and I consider myself a GLBT ally. I am also a woman of color, and many of the arguments in here did address people of color, so I figured - "Yesss, a text that covers minority groups with intelligent expansions, let's do this."

Or so I thought.

I'm trying to figure how three Ph.D individuals offered such a disjointed, unorganized, and even grossly offensive text in some measures. I'm blown away really trying to reflect because it was so underwhelming and by the measure that it did NOT do what it promised it would do. I'm willing to concede that the idea behind this text was great, and the introduction was well written, but the actual citations given in the body of the book were very difficult to follow, and the assertions I'll admit made me want to throw up my hands for comparison and stereotype, as well as tangents that were frequently taken when expounding.

The long and short of what this text comprises is 21 common myths that are attributed to GLBT life and lifestyles, and the three authors who grouped together for this text made an aim to debunk these respective myths. The problem was...I didn't see much debunking in this book at all.

Let me first list all of the 21 Myths that are given in this respective book just so you guys can have an idea of what the book proposes.

Quite many of these are very serious stereotypes and myths so I expected them to be treated with thorough investigation and expansion. If I'm referencing a text that did GLBT myth debunking very well, reading John Corvino's "What's Wrong With Homosexuality" and the way it debunked many stereotypes on the basis of social, religious, among other stereotypes I thought were brilliant and personally evocative. So, after reading that among other GLBT narratives that were academic, insightful, and for some personally evocative, I expect so much from this narrative.

The introduction of this book was fine. It actually made me anticipate what the book was going to present and I thought it would be a mature expansion on each of the myths that were covered in this respective text.

I had problems with the expansion from the very first Myth debunking. Especially when I read a few lines like this:

When a gay man walks down the street, he does so like gay men do. When a lesbian laughs at a joke, she is laughing like lesbians do. The individual is seen as inseparable from the group identity.

Act differently how? This wasn't followed up and I'm (at this point) side-eyeing the heck out of my screen.

The context is that the myth is exploring the measure of people's "gaydar." This puzzled me because the long and the short of what I'm thinking on this topic is "You CANNOT judge a person's sexuality by the way they look. Nor should you." Trying to frame the argument seriously around a "gaydar" is not only disingenuous, but it's also really...stereotypical (and isn't this book about breaking those stereotypes?). The chapter does eventually say that people are mistaken on judging people's sexuality based on looks, but it's a bit meandering in its focus and narrative both.

It's not that I don't understand that we (as people in general) give off sexual cues and have variant factors about our person and personality that attract us to different people, but the narrative should've been a little more apt to saying that versus trying to segment this by factors of gender or race or orientation. There were some interesting factual tidbits given about GLBT men and women serving in the military and the histories on how people discriminated against those hiding their sexuality (based on factors of appearance), but considering the presentation is so disjointed that it jumps from one measures to the next without transition - it was difficult to follow.

But I thought "Maybe I'm being too critical and should just read on and see what they say. Maybe they might come back to it later in greater detail, because surely the text can't be this juvenile." But overall, the first myth debunking was a fail because it didn't really "debunk" or refute the claim in a way that made it easy to understand why it was a myth.

I did read on in this book for a while and appreciated the presentation of some aspects including transgendered living, the history of the term "homophobia", history of GLBT identities being labeled under disorders and the complications and destructive assumptions associated with that, among other measures. I also appreciated the recognition that GLBT individuals are of different races, religions, and respective backgrounds. But I was a bit shocked by how little research or citation some of these measures had - it made it difficult to not only determine who this book was written for, but also thoroughly vetting out some of the myths themselves for larger food for thought. Then the narrative started taking tangents again to the point that I wasn't following the arguments easily, it would talk about one topic and then transition to another without good form. If the individual sections had dividing points where the narrative were allowed to expand upon those specific factual tidbits, it may have made the narrative easier to follow.

I was really horrified by the assertions in this book made about the death of Matthew Shepard. It wasn't presented in a constructive manner at all, even for what they probably intended to present it as. The way they *tried* to frame the argument was that Matthew Shepard's death remained a mystery to the public as to why it happened. That's what they were going for, but it had this condescending tone over the measure rather than an unbiased presentation. The whole measure that the public outcry over his death was "not based on criminology or logic, but emotion" was so off the mark, I don't know how anyone could pickup this book and not see the offense in that. The way this book presents it makes it seem like the response in the GLBT spectrum for awareness and campaigning in the aftermath of his death was moot, if not unsubstantiated.

Or even rage this assertion:

"Even if there had been a state or federal hate crime law in place, it is also highly likely it would not have prevented the murder."

...I don't know if I can even dignify that with a response. I wanted to throw the book down at that point (had it not been a digital copy), because it's such an odd assertion of logic. I'm beyond livid at this trivialization of a complex and sensitive matter. With very little to no research or resources cited at that.

I also had trouble with the debunking of the last myth which had to do with HIV testing and the prevention of spreading HIV - but it was so awkwardly worded and jumpy in assertion that on one hand, it seemed like they were denouncing the importance of testing, and on the other hand saying it was important.

Not recommended. There are far better texts on GLBT living and debunking myths, and this is not a good resource for the measure because not only do they lack sensitivity or research to inform on the matter, but it's meandering, unfocused, and unnecessarily convoluted. Not illuminating or aptly informed of its subject matter at all.

Note: I received this as an ARC from Edelweiss, from the publisher.
Tweet