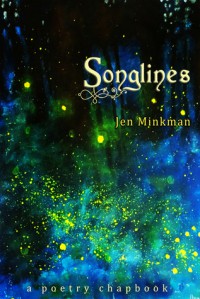 Initial reaction: I like Jen Minkman's poetry more than her prose, as some of the poems in here are actually quite well composed, but this collection does feel like it stops a bit short.

Jen Minkman's "Songlines" is the first collection of poetry I've read from her, and you can think of it as a bite sized collection of sorts. That's a bit of a pro and con to that, because while the collection is easy to read, I thought it ended very quickly before it really got off the ground. Nonetheless, I liked quite a few of the poems in here for their bit. "Fatal Attraction" was interesting with its turns of dark imagery, even from the first lines "I have always wanted to dance with you:/a soul dressed in black/spinning around on crashing waves/hulking in a ship without anchor."

"No Control" was another I liked for its observations "under a sky littered with stars" and how miniscule the narrator feels in observation, "wondering whether we are all stardust." I think many of the bite sized poems in this collection convey the thematic of seeming small in a larger scope, and that was shown quite well in turns. There's even a poem written by Minkman's father on her wedding day in "23rd of June" and that was a nice inclusion in itself.

Some poems struck me more than others, but Minkman's use of line breaks and cadence through each of the poems is sound and certainly evoking with the rolling dynamic. While it was a bit more abbreviated than I was hoping for, I hope to have more chances to read Minkman's poetry in the future.