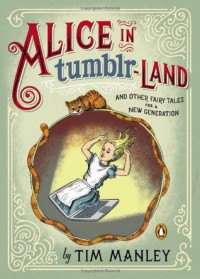 Initial reaction:  This book had the potential to be a pretty awesome read, at least in premise. Told in a series of short, toggled stories with popular fairy tales and Disney-esque references paired with illustrations, "Alice in Tumblr-land" explores what might happen in the lives of such characters if they had social media in their lives, with a slant towards adult crude humor.

Only I barely found anything funny in this collective read, if at all. Maybe if you find Beauty and the Beast sexting each other, Beauty (sometimes compared to Disney's Belle because of certain references) obsessing over her weight because of Thinspiration, Little Red Riding Hood's grandmother obsessing over Red's boobs, Aladdin and Jasmine having marriage problems, and Sleeping Beauty suffering from depression and anxiety hilarious, you might find this book funny.

I might do something a bit different from the usual review for this one - I'm going to have various Disney characters (who were actually featured in this particular story) react to this book in a series of short scenes/tales. And hopefully point out some of the problems that this narrative has in a creative way.

This ought to be more fun than the actual experience reading this book, if I can manage to do it. Oy vey.

Author's Note/Disclaimer:  The following stories are penned for the purposes of humor in association with my reaction to this book.  I do not own these Disney characters, and these perspectives are not reflective of any Disney affiliates or creators.  I guess I put this disclaimer as a way to cover my bases, but really I'm only doing this for fun and critique as food for thought.

So basically, the short pieces of text in this book and illustrations are taken from the author's blog that features adult crude humor interpretations of fairy tales and Disney-esque turns in what if scenarios associated with social media.  I liked the idea behind it, but the humor wasn't my cup of tea at all for the most part. The humor was too much and much of it wasn't funny to me.  I'm going to stretch my creative wings a bit to present a few reactions, in the form of popular Disney characters, to the content contained in this book. I'm hoping it also reveals some critiques that I have about the presentation of humor and problems in this book as well.

Since these run a little long, I'll let the stories speak for themselves.  And fair warning, this review has a few gifs.  Enjoy!

Wendy:  I just finished the most peculiar story.

Peter:  Really?  You gonna read it to me?

Peter: Why not?  You never had a problem reading stories to me and the Lost Boys before.  Does it have pictures?

Wendy:  Well, yes, it does, but that's not the problem. And I think it might be awkward since the story's about you.  At least in part.

Peter's brows raise, and then he grins wickedly.  He flies over to Wendy, but Wendy clutches the book tight to her chest.

Peter: Aww, come on!  You're not being any fun keeping it from me. I wanna see.

Peter flies around her, trying to grab the book as she moves it in the opposite direction of where he reaches.

Peter: Wait, what's that over there?

Wendy's so surprised by Peter's about face that he plucks the book from her hands with ease.  And considering Tinkerbell's laughing in a far corner of the room, out of where she can sprinkle Wendy with pixiedust, Wendy can't fly after him as he floats in the air above her.

Wendy goes to grab the book from him, but Tinkerbell yanks her back by one of her curls.

Peter: Easy, Tink. Leave her alone.  I just want to see what's in this, that's all.  What's all the fuss about it anyway?

Tinkerbell pulls back from Wendy, but doesn't look happy for getting scolded.  Peter floats in the air on his back above Wendy.  Wendy sighs, folding her arms across her chest while looking up at him, helplessly.  Peter holds the book above him, reading and flipping through several pages.

Peter:  At least it looks like a regular storybook, but the pictures are weird.  Is that supposed to be me?  And John?  And Michael?  Why does it say that I wanna grow up and get a job?  That's not me at all.  And I'd never neglect the Lost Boys for something called...Facebook.  Or a blog, whatever that is.

Peter flips through more of the pages.

Peter: It keeps saying that I have weird relationship with Tigerlily, sending her weird pictures of myself in something called email, but it ends up posted everywhere.  And like I'd abandon Tink. And then having me work with Captain Hook?  Like I would work for that codfish!  At least the pictures make him look like one!

Wendy: That's why I said it was odd.

Peter: At least they mentioned you too, but it was about having kids after coming from Neverland and then you were "too tired to do anything else".

Wendy doesn't look happy about that, at least from Peter's perspective.

Peter: Is this supposed to be funny?

Wendy: For grownups, I suppose it is.

Peter grins, closing the book casually and allowing it to fall safely into Wendy's outstretched hands.

Peter: All the more reason I never wanna grow up.  It's no fun at all.

Beauty and the Beast

Cogsworth paces frantically in the halls of the East Wing, looking distressed.

Cogsworth:  Oh, of all the dark days to be having, this is one of the worst.  That book should've never been brought from the village, and now everything is ruined.  I told them it wouldn't do, that it didn't seem like a book she would love, but does anyone ever listen to me?  Noooo....

Lumiere:  And what iz wrong with you, my friend?  Your pendulum's swinging a little more than usual.

Cogsworth:  Do you mind?! I don't have time for you making odd assertions about me, whatever that's supposed to mean.  We have a problem.

Lumiere: I see no problem.  Actually, it's been fairly quiet today.

Lumiere flinches as a roar echoes through the hall from a distance. Cogsworth gives him a side-eye glance.

Cogsworth: You were saying?

Lumiere: Seems I missed something.  The master's angry.

Cogsworth: And for good reason.  The master's angry because the lady's angry.

Cogsworth: Long story short, she read a bad book that was brought in from the village.  And she threw it at the wall in the library.  Several times.

Lumiere:  Ah, ze trials of ze bookworm.  Romantic when it works, terrible when it doesn't.  Was it an unfortunate tale of love unrequited?  A tragedy?  A murder gone unresolved?

Cogsworth:  No, if only it were that.  It seems it was some dreadful sensationalist piece about the master and lady's "relationship," if you will.  And about the lady's person as well - about her weight, things that she was teased about as a girl, and even further suggesting that she was inspired to stop eating carbs because of something called "Thinspiration". I told the courier who brought it that it was a bad idea, but he insisted on the delivery.  I take it he will never set foot on the castle grounds again. That is, IF he values his life.

Lumiere: Was it really that bad?

Cogsworth:  Oh, it was worse than BAD, I assure you.

Lumiere: I suppose we should do damage control.

Cogsworth: Yes we should.

Lumiere: Say no more, Ce'st la vie.  But was there anything actually funny about ze book?

Cogsworth:  Perhaps...There was a joke about Jack climbing beanstalks but never getting as high as the first one?

Cogsworth:  Neither do I.

Aladdin groans as he closes the book in hands.

Aladdin: Why am I always the one that's supposed to be in trouble?

Iago:  You get a book written about you, and you're COMPLAINING?  Me, I have to be the anti-hero, and no one ever talks about me!  You, you get a whole subsection in a book about fairy tales gone awry.  Matter of fact, you're the only one who gets even directly mentioned in the whole Mickey Mouse organizational references.  Why does this NEVER happen to ME?

Genie:  I think because as much as you talk about yourself, a book wouldn't even begin to cover you.

Iago: I RESENT that!

Aladdin: Guys! Focus!  Look, I mean, I'm not the most perfect aspiring Sultan in the world, but somehow I don't know what it is I did that made Jasmine mad, mad enough to get so frustrated and break up with me.

Iago: Maybe it was that woman in the Marketplace you were singin' with.

Aladdin:  No, actually she kinda scared me...

Genie: Ah, don't worry about it, kid.  I read the book too and what I got out of it was that most of the humor's pretty much a theater of the absurd.  It kinda throws a lot of things at the wall to see what sticks, but some of it does, others don't.

Aladdin: Well, I didn't like it for ~reasons~, but do you think other people will?

Genie:  Some might, because I think trainwreck fairy tales are all the rage in that millennia. But it's kinda iffy because when you have Sleeping Beauty suffering from depression, a sexual disease, and something else, when you have a wooden puppet's nose breaking everything in sight because he lies all the time, and King Authur and Lancelot being buddy buddy and getting jobs at Applebees and Starbucks and try to pass it off for humor, it's going to hit people different ways.

Genie: That's probably the point.  It's so random and over the top that some might think "Wait, this is weird" while others might laugh about how it's taking things from that period that are familiar and throwing it every which way but loose.

Aladdin:  I guess.  But I think it's still going to be offensive to some people. And it's such a short book that I don't know who would buy it.  Maybe worth a one-time read maybe, but I don't know.

Genie: I think probably if people are worried about the humor, they should just look at the author's webpage.  That's what this is based on anyway.  Then they can determine whether it's for them or not.

Iago:  Nevermind that, when am I going to get my own book?  Or my own webpage, too? Seriously, is that too much to ask?

Iago continues talking a mile a minute, complaining about how he doesn't get enough media coverage or respect.

Genie: (Good idea.  He can keep talking, but I think we're done here.)

Aladdin and Genie board Carpet and speed off into the night, leaving Iago behind.