Review: All He Wants by C.C. Gibbs 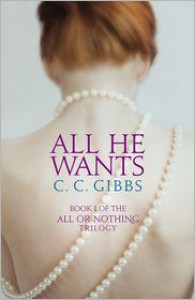 C.C. Gibbs kind of wavers between taking it in a different direction and staying within the tried formula.  Unfortunately, this narrative is a little too familiar to make it stand out, and I'll admit the read bored me after a time.

I didn't entirely dislike the characters here from the beginning, it looked like from the structure of the characterizations and focus on both the heroine's family and work life that this would be a decent read, same with the hero despite his respective issues.  I actually followed it rather well.   Dominic is a charismatic billionaire but when he has a mean/control streak, you know it from the get go, and part of it has to do with the death of his wife.   He likes to be in control - especially in matters of business.  Kate has an interview with Dominic's company and given that she sees his control issues from the get go, she starts to move out.  He does not let her,  he proceeds to spout B.S. to try to keep her there.  While I thought Kate showed a palpable amount of resolve against his controlling ways, and she is really intelligent, but  I also didn't get why she had such an about face and desired him so much.

I had a hard time following the dialogues, and frankly the book bored me.  I expected so much more development of the characters and scenarios themselves.  And for the book to end on such a cliffhanger, was that entirely necessary?

Wish I really could've enjoyed this more than I did, but it disappointed me greatly.

Note: I received this as an ARC from NetGalley from the publisher Forever.