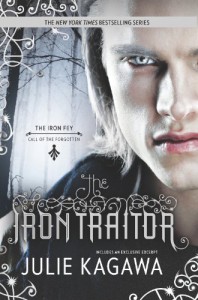 Initial reaction: Dude, that ending. That cliffhanger (but a darned good one). I think this series is shaping up to be a new favorite for me, and I loved this book, but I just have to say two things in the aftermath of reading this book:

I'm loving the "Call of the Forgotten" series so far - Julie Kagawa has such an eye for building the realm of the Fey as well as presenting characters that are intriguing to follow in the conflicts presented in the world.  "The Iron Traitor" is a strong follow-up to "The Lost Prince" - providing a compelling narrative that carried me all the way through to the end, and lending into a follow-up that's sure to have much momentum to carry forward as the series continues.

This book picks up a little bit after the events of "The Lost Prince", and I have to say that Ethan's prejudices against the fey are much less than they were in the previous novel, though he still has his respective insecurities.  Following up, authorities and peers alike question where Ethan disappeared to for a time with Kenzie (such is the lament of one who isn't born with fey blood, as Ethan notes - you can disappear, but people will wonder where you are).   Ethan isn't just worried about Kenzie in what transpires shortly after they return, but he also comes across alarming news about Keirran, who has disappeared from the Fey realm.  Worried that Keirran may act in desperation over a lover who's existence is being erased, Ethan decides to go back into the world of the Fey to find him.  Though Ethan has more ties to events than he even knows, and it may prove disastrous for him.

From reading this book, I'll admit I'm enjoying following Ethan's character quite a bit. He's a flawed character, but I'll admit it's easy to care about what he thinks and see how he feels within all the events and revelations that are handed down to him. I followed his perspective well.  While there are focuses on the romantic elements between him and Kenzie (and even Keirran and his beloved), the story's more action oriented and focused on the clashes between the ever-present tensions of the realms of the Fey and the real world.  I appreciated even seeing more of the familiar faces from the last series - including Puck and Grim, who have more focused roles in this story than perhaps the former.  (Megan and Ash make brief appearances, and both are very significant to the route of the plot events.)

I will admit that I had an idea of where the story would go after a time when the foreshadowing measures started playing into Ethan's role and clashes with Keirran, but I still didn't expect the ending to hit as much as it did.  Keirran's motivations are clear-cut, I understood his flaws as well - even in the realm of his desperation and darkness, but it didn't keep me from raging (at him) when the ending of this novel came.  It's a great cliffhanger, though I'll admit it makes me curious to see where Kagawa will take it, for what also transpires with Ethan especially.

It's a novel that I would highly recommend, and I'm definitely looking forward to the next book.  Great points of humor, action, adventure, romance, and palpable stakes.