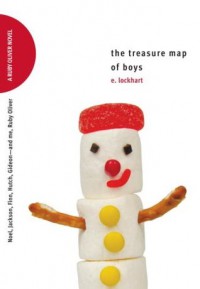 E. Lockhart's "Ruby Oliver" series blew me away in terms of a coming of age, contemporary YA read filled with a lot of humor and true to life measures.  I only wish I'd read a book like this in my teen years, because the protagonist, Ruby, is so refreshing to follow.  Far more developed and identifiable than I would say many YA female protagonists are (which kind of saddens me because I'd love to read more heroines like Ruby who show character growth over time and are witty to boot!)

I'm choosing "The Treasure Map of Boys" as my favorite of the four book series because of the following measures, which I wrote in my review for the book:

Ruby's voice is just as humorous in this novel as the previous two, but somehow this novel hit a little closer to home for me considering Ruby has to deal with quite a bit of fallout as the relationships she comes to consider turn out to be not as clear cut as she thought they were, and in drawing the treasure map of boys that Dr. Z gave her as a therapeutic tool, she realizes she's at more of a loss with certain events than ever before, which bring along some rather jarring panic attacks.

I think this book had a more clear cut resolution arc than the last two novels, and the ending of this one was particularly sweet in my eyes. I loved the cast of characters, their interactions - light as well as tough, and the peppering of humor that's so close to the heart of this series. I'll admit I developed more of a reader crush on Noel because he's such a sweetheart - and its fun to watch his interactions with Ruby in the lighter moments. I'll admit also that my like of him has to do with the Fruit Roll-up love he has, but I have no shame.

I could name many more individual favorite books from my favorite series, but I think I'm happy with citing this one. =)  Until next entry all!