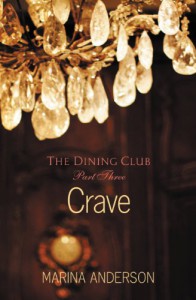 This is a quick review, because that was the quickest I've gone through a galley in quite some time. Not much really happened in this part of the serial novel, to be honest. My mental filter kicked in when I hit the sensual scenes, because I couldn't really believe it - it was just a complete disconnect from the scenario presented.

I'm giving this 1.5 stars because I had the chance a little more of Amber and Andrew in this one and came to know their motivations a little better - and maybe it's because their motivations and personalities jump out more than Grace or David's. Didn't care about Grace and David because both of them got on my nerves. This is probably not what Marina Anderson intended, I'm sure, but in the scheme of things really don't care about Grace and David's relationship. Nothing's convincing me of their relationship - there's no true intimacy or connection built between them, for me to see anything for what they see in each other and why they're taking their relationship to this level. This was especially a problem in "Bound." I'm understanding that this is a club for pleasure, but David is apt to leave Grace all by her lonesome to get his fix, and Grace is absolutely terrified (but yet aroused) of these trials that she has to go through.

The narrative relies heavily on having other characters (Andrew and Amber) tell how David feels about Grace, but it would be a far better thing for the relationship to be shown. I can tell from Amber's reactions that she likes this club, she likes David, and her physical and mental reactions are apt to that. Andrew's still a little less developed than I would like for a character, but I still like him because he is noted as an observant character.

The twins? They're still props for characters. Laura? Um...no.

This story felt incredibly shorter than the other installments, so I blew through it quickly. Will pick up the next one shortly because despite how I can't seem to get into this serial novel's motivations or characters, I do want to see if it improves at all. This really wasn't something I would call enticing, sexy, or interesting, and it really wasn't that much better than the previous part for comparison, but my personal bias was that I want to know how Amber and Andrew's roles develop in this whole thing. And I can maybe hope that Grace gets a backbone and David can get his bum kicked somewhere else (seriously, I'm just done with his character).