Review: Hijacked by Your Brain 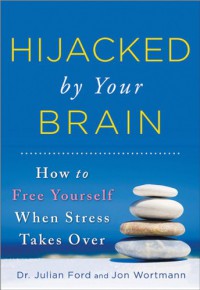 Initial reaction: Valuable guide, but quite a bit of information to wade through to get to the better bits here. I think the authors were insightful, and provided some interesting combinations of personal experiences from everyday people, celebrities, athletes, and others who have been in many different levels of stressful situations, but at the same time, when it came down to the mental walks that they would ask the reader to take, some of them were awkward and not as applicable as they could've been.

I read a lot of self-help, self-awareness, psychological, and fitness/wellness guides for reference. Picking up "Hijacked by Your Brain" was something I looked forward to not only for noting the scientific aspects of the brain's chemistry, but also for dealing with natural reactions of stress and how to trick your brain into working the best for your needs.

The advice, for the most part, is sound throughout this guide. They explore some of the inner workings of the brain and what goes into what happens to the human body when it's under duress. It explains "fight or flight" responses, stress as it applies when we mentally freeze up and can't function, among other things. Yet, I'll admit after a certain point I found myself struggling to maintain interest in certain turns of the work because it was trying to give too many examples and dictate to the reader how to approach recognizing responses to certain stressors. This guide probably would've been better to consolidate information and incorporate quizzes or lists for self assessment versus trying to ask the reader "Imagine if you were in a CAR ACCIDENT, what would you rate your stress level to be? This is what the scenario is. You would think..." Nah. It's a far more constructive thing for people to be able to come up with examples of their own in terms of everyday stressors and note how they react to them, not be dictated the scenario. The interaction component of this guide was sadly lacking, and I think it could've been better presented than what it was.

Another thing I thought made this book somewhat bloated were some of the odd examples they would give. I appreciated hearing the individual accounts of some everyday people in situations where their stress would occur and how they would deal with them. I also appreciated hearing about the extraordinary stressors from athletes and people who climbed Mount Everest. But then I questioned why this would include the whole Kanye West/Taylor Swift debacle as a practical example and I thought it was a bit strange for this kind of guide. I suppose it's a valid mention for someone having to step back and see something they did to be wrong, but it was still weird.

I did like the insight the guide gave on stepping back and evaluating the body's reactions and how to look for and address them. The two systems: the F.R.E.E.D.O.M and S.O.S approaches were both well noted and precise guides to aid in the mental walkthrough of what to do when stress becomes a problem in specific situations. Because positive thinking won't necessarily, by itself, help address stress reactions, addressing what causes those reactions and the need expressed in those reactions does.

Overall, I think it's worth the read for supplementary material on this topic, but I wouldn't necessarily recommend it as a primary guide. There are others that handle the information a little better, and for those who crave a little more interaction/self-exploration rather than dictation, it would be better to look elsewhere.

Note: I received this as an ARC from NetGalley, from the publisher Sourcebooks.