Review: Stay With Me by Elyssa Patrick 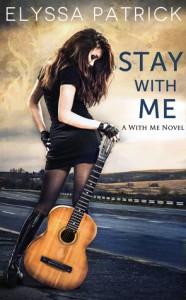 I think Elyssa Patrick's biggest problem with "Stay With Me" was that it was incredibly boring and shallow.   I really dislike saying that, but I don't think there's any other way to say it in succinct terms as far as why this novel didn't work.  The prose is dry, most of the time the focus in the narrative is on Caleb and Hailey making eyes at each other and having sex, and for a novel that supposedly had moments of building up over a "tortured past" female character, and a male character who was so perfect and helping her "find her place"  I couldn't stomach how uninspired and lacking in emotional resonance this was. .

Hailey is a former child star - actress and singer - trying to adjust to a normal life by going to college and leaving her celebrity life behind her.   She's estranged from her celebrity mooching mother, and has a "deep, dark secret" which she believes that everyone would hate her for.  People have betrayed her in her life and she won't allow herself to get close to anyone.  Lo and behold, she meets Caleb, a guy that she can't keep her eyes from, and the narrative spends the longest time having them gaze into each others eyes with lust among other dwindling moments of romantic possession. The chemistry felt so elongated and forced. I actually hoped it would improve as the narrative went on, but I didn't feel their connection - it was threadbare at most, and for some reason, I thought that the characters in the novel were at arm's length for most, if not all the time they were featured.  Caleb's sister was an interesting character, probably the most vibrant the narrative had to offer, but even with her, something felt like it was missing - like the characters could've been developed and given more substantial weight and stakes in the respective narrative.  There was very little intimacy and emotion throughout this.

The narrative keeps driving attention to Hailey's secret and when the reveal is pulled - I felt absolutely nothing.   It wasn't a shock, it wasn't a surprise - it wasn't handled well for the reveal.  I've seen many narrative deal with the emotional ties of that measure, and by far and large, the disconnect in the style of the narrative ruined it, if it had any point of suspension at all.  I could also note that for the presentation of celebrity and music (including some very threadbare turns of lyricism), it was underwhelming.

I can't say that I would recommend "Stay With Me" because of its formulaic measures and stylistics.  Granted, I know this is supposed to be a coming of age and branching out story in the root of celebrity life, but I think there are far better narratives to be had in the scheme of contemporary romance, New Adult, and tough subject stories than this.  I will concede that there were surface moments that I thought were promising, but those were far and too few between for me to rate the narrative higher.