Review: The Leaving by Tara Altebrando 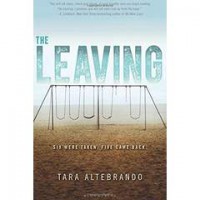 Quick review for quite a strenuous read. I think "The Leaving" had good ideas and intentions, but in the end, none of it worked for me. I'll admit I really had to push myself in a marathon just to get through this book. It was very sluggishly paced (for little to no reason at all), the characters were lacking (you have three perspectives: two of the abducted kids and one who's the sister, and there seems to be a mismatch with the gravity of the emotional events with the voices of the characters, who seemed very removed from it all despite having gaping holes in their memory and a potential missing kid that they don't even remember who might still be out there somewhere), and the mystery had little to no buildup. Matter in point, the story ends with such a telegraphed ending with very little expansion that I just felt underwhelmed at the whole deal despite this being in a genre I usually like. I spent more than 3 hours in spurts just to get that ending? *sighs*

The variant font stylistics also added nothing to the story, so don't think you're missing much if you don't get the inclusion or why it was done that way.

In the end, not my cuppa and not really worth the time I spent on it. A shame since the premise and certain reveals in the book had potential, but the cast of characters, pacing and narrative focus just weren't there.