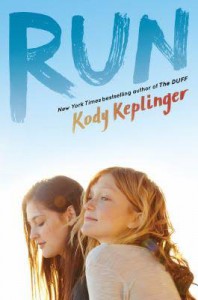 Quick review for a quick read. Ye Gods, I actually adored this book. I think one of the things that stayed with me through the read and moving out of it was the relationship between Agnes and Bo - that sold me through the narrative. It's hard not to find yourself drawn to their individual stories and circumstances knowing how different they are and how they end up clicking even with those differences in tow. I think Keplinger did a fine job of showcasing their situations and the hardships and emotions they deal with through the novel.

Long story short: "Run" is a coming of age/journey novel though not necessarily in the way one would think of it. Bo is a young woman who's frequently misunderstood because she comes from the "wrong" family and is heaped with all kinds of sexual stereotypes and backlash. It doesn't help that she lives with a mother who doesn't care for her and tears her down every time there's an opportunity to do so. Bo longs to live with her father, with whom she wants to reconnect to have a chance at a better life. So she makes the choice to run.

Agnes is a young woman who lives with a disability and longs for the freedom to be able to do what she wants outside of her sister's shadow and the expectations that are heaped upon her by the circles she's surrounded in (whether it's her parents, her church, etc.) When she meets Bo, her world changes and opens up - in good ways and more mischevious, ultimately culminating in a choice for her to run with Bo as well.

The novel trades between the past and present in a smooth way, transitioning and marking points of tension that really revealed much about the characters to me while also propelling me to read what happened next in the ongoing conflicts. I thought that the narrative really brought to life the Kentucky small town they resided in and why it felt so confining, as well as the stereotypes and prejudices the girls found themselves battling against. The dialect didn't bother me, to be quite honest, I found it smoothly drawn and easy to understand (and maybe it might be that I'm used to that kind of dialogue in narratives I've read before as well as my locale.) It felt realistically drawn and I loved the fact that it showed realistic representation of both a character with a disability (blindness) as well as a character who identified as bisexual, though the struggles with that were shown in brief spells.

The fact that it had brief interludes of the characters traveling on the road and progressively battling against their own doubts and issues really struck home with me, alongside the strong voices of the characters. I could definitely see myself re-reading this again. I enjoyed it, and definitely would recommend the read for those who not only like coming of age stories, but also good friendship stories centered around well developed characters.