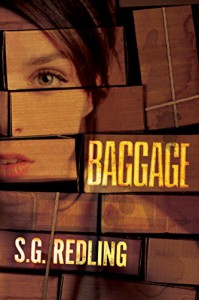 Quick review for a quick read. What a wild ride of a read that was. "Baggage" does a great job of keeping the reader in the dark about the "whodunit" for this particular grisly murder mystery. Anna Ray is a young woman who has been through...a number of different things. The date February 17th has much significance - the day her father died, the day her husband died years after the previous death. She tries to put as much distance as she can from the date, though she notably has a drinking problem to forget the pain of her past. Yet, when the date rolls around again - despite being in a new job, new life, with people to support her, yet another person ends up dead with ties to her.

Anna Ray's a hard protagonist to like - an anti-heroine who has a particular coldness and hard demeanor that isn't quick to be sympathetic towards others, even surrounding death (though she has her moments where she has that capability), but her story is compelling as the narrative trades between the past and present to shape the reason why the way she is, alongside showcasing details and revelations from the current mystery. As facts and relationships reveal themselves, I'll admit I was taken into the full thrust of the narrative. The reveals satisfied enough to tie the loose ends that were brought to the forefront of the story, as well as revealing Anna Ray's role in it all. I definitely appreciated the read, and Amy McFadden did a fine job as the audio narrator for the story.