Review: Those Girls by Chevy Stevens 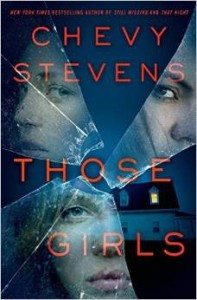 Initial reaction: I'll admit that as I'm sitting down to write the review on "Those Girls" by Chevy Stevens - I'm a bit at a loss for words. This book was so visceral, intense, and I couldn't help but feel right in the heart of the anger and hurt for the characters in every step of the horrific abuse they suffered. There were many moments that my hands were shaking as I listened to the audiobook, anticipating what the characters would do and hoping they found some sort of piece of mind as the narrative went on. (Alas, that was far and few between.)

Even with this, the narrative definitely had its slower moments and some threads of the plot that were either convenient in placing, or weren't really tied up that well. For that, it gets a high 3.5 star rating from me.

I was completely taken by surprise by how gut wrenching Chevy Stevens' "Those Girls" turned out to be. It keeps you on the edge of your seat and doesn't let go for a while. Three young women raised by an abusive father escape (following horrific turns of events) to find themselves in captivity for a number of days, from which they barely escape with their lives and try to start over with new identities, only to get sucked back into their past.

The first part of this book was intense. I couldn't help but be drawn into the girls' situation as it descended from bad to worse. Stevens' prose and pacing is so spot on, the emotion of each of the ladies fully in the forefront. The first part is told through the POV of the youngest sister, and it broke my heart in terms of what she (and her sisters) endure as they end up having to take on entirely new identities in a march towards living in Vancouver. Fast forward several years later - the younger sister's daughter - Skylar - learns bits and pieces in her mother's and aunts' ordeals and ends up going on a journey pursuing the road they once took in order to find her missing aunt, only to end up in a nightmare of her own. I didn't like Skylar's convenient naivete, but I followed her journey nonetheless and felt for her in some of the more horrifying realizations that she comes to know about her own true history and the ordeal she faces. The latter part of the book trades between the younger sister, her daughter, and the elder sister. I felt that the latter part of the book really slowed down in terms of the momentum, and the utter idiocy of the police made me cringe in the light of such glaringly obvious points of investigation and threats. Nonetheless, it held my attention and I couldn't look away from the turns of events even up to the horrifying conclusions of the conflict. It's a read that hits home in so many ways about the horrors of abuse (physical, sexual, emotional) and yet it's also the story of a struggling family who tries to cope through all of these different hardships - even to the point where their decisions are clouded by the grief and desperation they feel to protect each other.

I liked the read immensely, even with qualms about its pacing among other issues. I'd certainly read more from Stevens' bibliography from just the strength of this narrative alone, as it gave me so much takeaway even in the aftermath of reading it.