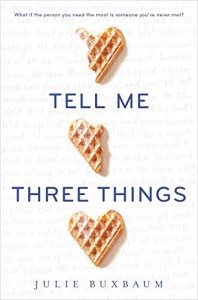 Quick review for a quick read. "Tell Me Three Things" is a sweet story at its core. I liked it overall, but there were moments through it that I had a hard time with. I did love that the story was a combination of dealing with loss and finding new beginnings.

I felt that Jessie's voice in the beginning was far too forced for sardonic and put down humor. I did notice this toned down as the book went on, though, so it may have been one of those things where it took a little bit for her character to even out and her life to become more front and center. But I also get peeved when people use slut shaming and body shaming as points for humor or making other characters, including ones the MC hates, valued less than themselves. This is not okay. Jessie vexed me to no end doing this in the beginning and there were times i was ready to put the book down for that. Thankfully, I didnt and I'm glad it ended up being a better narrative than some of the points it started on.

Taking those peeves aside, it's the story of Jessie adjusting to her new life after her mother passes away and she moves away from the life she knows to a new school and new life with her father and new stepmother and stepbrother. She also makes a new friend in SN, a boy at her new school who remains anonymous, but messages her in a series of conversations that are at times very humored and others supportive. Jessie spends a good part of the narrative trying to figure out who SN is (for the record, my guess ended up being correct, but the narrative does a good job keeping the reader in limbo about his identity.).

I think it's definitely a memorable and solid story that make you feel for Jessie and her experiences, with some nice moments of self awareness, coping with multiple conflicts, and relationships (romantic and not) that really pop off the page.