Review: Things We Know By Heart by Jessi Kirby 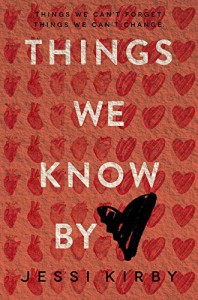 Quick review for a quick read. I think this story went over a little better for me than "Golden" did, but I think it might be my connections to liking stories akin to this that might've given it the edge. "Things We Know By Heart" actually reminds me of a reverse storyline to several stories I've read/watched before. From the movie "Return to Me" with Minnie Driver and David Duchovny to the anime/manga series "Angel Heart" - an off-shoot of the popular anime series "City Hunter" by Tuskasa Hojo, I'm familiar with stories (real and fictional) revolving around the impressions that donors get when their lives are saved thanks to a needed organ transplant.

Thing about it is, usually the stories I've read/heard revolve around the people who received the transplant. And in stories like that I found myself identifying because the character's survivor's guilt, their renewed energy, their struggle to get to a place of normalcy and going through their relationships is usually very vivid and heart breaking. It's hard not to feel emotional in stories like this. This story takes a different angle in that it involves the girlfriend left behind, frantically searching for the person who received her boyfriend's donated heart.

Quinn only wants closure in the aftermath of losing her boyfriend Trent to a tragic accident exactly a year before (and she counts the days to a certain point). She reaches out to the donors who received Trent's organs, but Colton Thomas, who received Trent's heart, hasn't responded. So what does Quinn do? She goes out to find him. Darned if she does, darned if she doesn't to try to find some connection to close her grief over Trent. She doesn't expect to fall for the boy who got his heart though. Romance! (Cue in choir singing and bright spotlights.)

For the record, I wasn't comfortable with the stalking aspects of this story, despite how much I could understand the grief of the two MCs and their need for closure/reaching out. This notation was hard to read, but for the sake of the story, I followed it to see where it would go. I thought the relationship between Colton and Quinn was very sweet in spaces. They had very good chemistry, the emotions, interactions, and grief they both felt was very vivid. I did find that some moments might've been a touch overwritten and most definitely cheese, but Kirby knows how to draw out the heart of emotion in her characters and situations - I even saw that back in my read of "Golden" despite having issues. I also liked the relationships Quinn and Colton had with their families, which is way better than most portrayals in YA fiction.

I kind of want Colton as a book boyfriend. He was a great LI and well-dimensioned character that I wanted to see more of in the length of the work. His moments of happiness are framed just as well as his struggles, and I thought the narrative did a great job of showing his range of emotions and personality. I feel also Kirby did a good job of showing Quinn's character and her respective struggles, though it made me think of an Asian drama that I still can't put my finger on for the title as to her perspective point. But it took forever for Quinn to tell Colton the truth. Ye Gods, I was like "JUST TELL HIM ALREADY!" One could curse my impatience, but the narrative, to me, felt much longer than it had to be for the way it drew the situation out. While I could definitely see where some moments had Quinn struggling for timing and knowing how to tell Colton the truth, I still felt - from a narrative standpoint - it was more drawn out than I would've liked.

It's a story I really liked and connected with, even with some noted flaws in the progression. I do hope to read more from Jessi Kirby eventually. I'm sad I haven't picked up some of her other work until now. Great audio narration by Amanda Wallace.