Review: The Way I Used to Be by Amber Smith 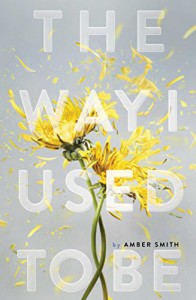 Initial reaction: Man, this book hit my heart in so many places. It's a read that definitely hurts and has many angles that hit well on its subject matter, but it's not without flaws. In my full review, I hope I can expand on this.

Amber Smith's "The Way I Used to Be" is an emotional experience; I can't say that there was a point that I had a dry eye upon finishing this book. One would expect something to that effect given the difficult subject matter of the book, centering on a young woman who was raped by her brother's best friend when she was a freshman then following her downward spiral through four years of silence.

Reading "The Way I Used to Be" reminds me a little of my experience reading a few of Ellen Hopkins books. No poetry here, but it's very raw and doesn't shy away from showing Eden's story in graphic detail. That means showing what happened to her during her rape and the aftermath in showing how it affects Eden's ability to relate with the people around her - from her family to friends to love interests. Suffice to say, Eden doesn't treat other people very well, let alone herself. It's a difficult spiral to watch; I'll admit there were times when I found it hard to watch Eden go to the point of no return with screwing up her relationships and trying everything she can to numb her respective pains - drugs, sex to offset her rape, pushing away all the people closest to her or even using other people as a means to end. Despite times when I wanted to throttle her or say "No, no, no!", I felt for her. Throughout the story I wanted so badly for her to overcome the spiral, even if there were moments where I felt numb by the holes she dug so deeply in her life.

The narrative does a fantastic job of showing Eden's viewpoint and psyche, though I'll admit what kept me from liking this narrative more was probably a couple of vital things that felt missing. This book takes place over four different years and for the time change, that means it'll make certain leaps in order to move forward with the story. However, it felt like there were key scenes omitted that contributed to some jarring leaps within the book. (For example, when was the point Eden started calling her parents by their first names? That's a pretty important transition that went unaddressed for the most part. While I did see moments where Eden had a falling out with her parents - their neglect at times making me rage - it didn't feel complete.)

I also realize that this is just one narrative that expounds upon an individual experience of rape and how it can negatively effect not only the person but their various relationships of different measures, but I feel like there could've been a better recognition of Eden's issues with using sex as a means to an end, a measure to fill the void left from her rape and struggles to be "normal". It caused so much conflict among her family relationships and friends, but was there really no one to tell her why that was wrong besides people choosing to cut her out of their lives? The narrative does give good insight on topics discussing sexual shaming (which I appreciated and wanted to hug Eden as she struggled with not only being the target of those attacks, but also struggling with her own negative self-labels). Maybe my mind is reaching beyond the context of this narrative's intention, but I feel like the moment Eden has her moment of recognition, the book ends too soon and abrupt - like we see many moments of her spirals downward, but don't see enough of her (very emotional and jarring) coming to terms - and that's one of the main points where it really got me. I think that's something that bothered me in the end, though the narrative ends with the note of things progressing further along in her recovery that we don't see as readers.

Even with those qualms, I still appreciated what this story had to offer. I still think this is a narrative worth perusing because it shows some hard fought battles and an eye to horrifying experiences that happen far more often than not with experiences with rape/SA. But I would also argue that it's important for people (teens and adults) to realize that survivors of rape are not all-encompassed by the terms "broken" or "damaged" - nor are their shaped by that experience alone. This is something that I feel many YA and NA books need to recognize and expand upon, and I feel like "The Way I Used to Be" could've had further expansion to make it hit home that much more.