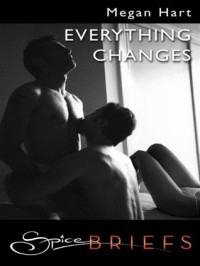 Initial reaction: Ahh, this is one of those times when I wish a companion short story would've been incorporated into a main novel because it clarified a few things, but not nearly enough. It manages to stand on its own to a degree.

I'm content to have this as a bridge to Hart's follow-up novel "Naked", though.

I still can't believe I read this almost four years ago and still haven't written a full review on it, but nonetheless, that's getting remedied right now. I did like "Everything Changes" - not just the first time I read it, but in re-reading it for the present year. I liked following Alex Kennedy for the most part in "Tempted" and this short. this book actually takes place during pertinent times when he's in a relationship with Jamie and his wife Anne. If anything, Megan Hart does a great job with establishing character intimacy, whether it's sensuality or just getting an idea of whom the character is in their mindset and life. This short story does a little bit of retracing through events in "Tempted", but it doesn't overwhelm or overtake the story for what it chooses to showcase on its own.

This little short also explains why Alex has the Hello Kitty pajama bottoms in the first place. I always thought that was a cute quirk to remember him by, but if you read about how they were given to him - it wasn't in good context. =/ Alex has commitment issues and it's complicated by the relationships he's had here. That overarching theme is something that's explored in "Tempted", this story, and "Naked". But even further, Alex finds himself the third wheel in the relationship here - and that's something I noted was a parallel with respect to another work of Hart's - "The Space Between Us."

Overall, I liked this story as a bridge between the two full novels and how it gave me a chance to learn about Alex Kennedy's character more, though I wonder how this would've fared if incorporated into the events of "Tempted", rather than as a stand alone.