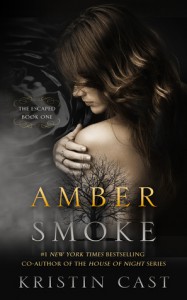 Initial reaction: My brain hurts after reading this book because it's very much all over the place. I think the long and short version is that this book tried to be a female mythologically D-grade sex horror comedy based version of Highlander and failed miserably.

If you don't understand that combination, trust me, neither can I.

I was going to wait a night to meditate on my reaction to this book, but you know what, I think I'm ready just to react right now.

This book was terrible, irredeemably terrible. I honestly went into it thinking "You know, I didn't like the House of Night series, but if Kristin Cast wants to try her hand on her own to write a New Adult mythological horror novel, who am I to judge? Let's go with it."

And to be fair, I liked the prologue of this book. I thought more of the book was going to be like that with the dark intrigue and prophecy fulfilling aspects. Instead, I ended up getting a really haphazard, unorganized story loosely based on an interesting piece of mythological backstory. I don't think this novel knew what it wanted to be. A romance? Psssh. There was too much instaloving going on and not enough connectivity to make that happen. And the gratuitous sex scenes (and sexual harassment/rapish scenes) seemed to come out of nowhere. A comedy? I'll admit I laughed, but for all the wrong reasons. I'll admit I laughed at Alek's stoic cluelessness (which was probably the only instance where I was supposed to laugh), but all the other characters were cookie cutter stereotypes that fumbled and bumbled around so much that I couldn't really care about them one way or the other.

Was this book supposed to be a horror? Yeah, definitely there were creepy moments in this book to be had, but some of them came across as very immature and cartoonish. Almost to the point where it overshadowed some of the moments where the graphic ickiness really did come across the way it was supposed to.

I definitely stand by my comparison to this being a female-lead mythological D-grade sex horror comedic version of Highlander. It has the whole TCO, it has the bare minimum mythos, the gratuitous violence...insta relationships, but it's just laughably bad. (And no Sean Connery or "the quickening". Darn.)

Yeah, I won't be picking up the sequel to this, not unless it takes a sledgehammer, breaks apart all the cheese and inconsistencies of this book and actually organizes it into something resembling an actual story.

Note: I received this as an ARC from NetGalley, from the publisher Diversion Books.