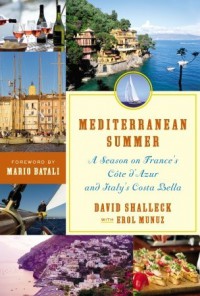 Quick review for a read I took my time with over the course of the past several weeks. This was a book recommended to me by my co-worker on a master chef's journey down France and Italy's coastlines while cooking for a well to do Italian couple. David Shalleck's journey started through eyes of a hopeful chef willing to learn all there was in a different country with some degrees of culture shock, but after a few opportunities fell through (not to mention some reality checks in the way of people saying he lacked passion/confidence for his trade), he found his second chance through working for the crew of theSerenity. I'll admit it was fun to watch David's interactions with his crewmates and meeting the challenges of Il Dottore and La Signora.

The attention to place skirted the surface of the crew's respective travels, and there was much in the way of food descriptions with some degree of intimacy and a great knowledge of preparation, though I did have moments where I had to adjust myself through moments because I wasn't familiar with all the cuisines and jargon - that slowed me down in places where it probably would've been a faster read if some moments were a little smoother with transition. The prose does a good job of defining terms as it's going along to make it easier for those unfamiliar with the language and formalities in Italian culture, as well as the expectations of David's respective trade and what challenges he had to meet.

In the end, it was worth the time reading, and I enjoyed it. Definitely a new experience for me as far as cooking literature is concerned. I've read narratives on food preparation and cultural interactions in that vein, but not quite like this one.