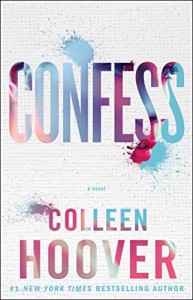 I have a feeling I'm going to be one of the few people who conveys my disappointment with this book and it comes from a lot of conversation jumping points. It's hard to know where to begin.

Maybe I should start with the positive since I can knock that out of the conversation from the get-go; it'll take less amount of time. The concept of writing confessions and featuring that within the book was a fresh and great concept. I'll give Hoover credit for that - she does feature quite a bit of fresh ideas when it comes to featuring different mediums of art (i.e. poetry with "Slammed", music with "Maybe Someday", and visual art pieces for "Confess.") The art pieces included in the book were beautiful, eye-catching and breathtaking. The confession pieces (I really wish more of them had been included) were brutally honest and eye-opening even for the brevity they served. I think the emotional inclusion of those pieces was more appropriate and even for this text than some of Hoover's other work. (Which is a shame, because the depth of "Confess" as portrayed was sorely lacking - I'll explain more in a bit on that.)

The other positive was that if you think about the overarching progression of this book and the scheme of events - it had some powerful revelations and ideas behind it. Between showcasing a young woman who had a child at an early age and being emotionally manipulated in that child's upkeep for years, and a young guy who was in an emotionally manipulative relationship of his own - that's a powerful parallel and the fact that these two individuals somehow meet and are tied together is otherwise a story I would LOVE. I could've easily given this 4 stars or even 5 stars.

Sadly, I thought the execution of this story was poor in its handling - very uneven despite some touching moments and places where the character development and backstory had flesh. It was too much and too little at the same time. It asked me far too many times to overlook details that I thought were too thin to begin with.

The story begins with a 15-16 year old Auburn, a girl whose boyfriend (Adam) is dying. The two of them have sex, since it will be the last time they see each other and they are in a deeply connected relationship (though I don't think his illness was mentioned and depending on what it was, wouldn't he be too weak to have sex? I don't know). This is revealed in the prologue. In a way, I felt like I was having deja-vu over a Korean drama I once watched and the reveal was so quick that it was hard to have a handle on, but I decided to go with it as the story went forward. (Though I'm still seriously creeped out by the fact Auburn joked about making a list of names of people who should die in the place of Adam. That was seriously not cool or romantic and it threw me out of the scene.)

Fast forward to the present day, and Auburn is stuck in a job she hates (stylist), stuck with a life she'd rather not have and with secrets in tow (but chooses to keep private), and lo and behold in walks Owen asking for a bit of last minute help with selling art in his studio.

Owen, who happens to have the same middle name as Auburn. Whose middle initials happen to be OMG. The fates have arrived! DESTINY!

I'm kidding. Even with some notable cheesiness, I kind of ran with it because it seemed, at first, the setup would have them with moments of decent chemistry. There are bit moments of this along with some intentional awkwardness (some made me cringe, others made me say "Okay, I can run with this.")

Some revelations are handed down as the story progresses and Owen and Auburn have more than a few secrets that are gradually unveiled and put a strain on their relationship. But the problem is...they really don't have that big of a relationship to begin with. It's insta-love. We're pretty much being told, as an audience that these two are perfect for each other, that it's meant to be (especially on Owen's side of things, and at first, this isn't clear why). I didn't like how this was force-fed, and I definitely didn't like how convenient in points it seemed, but I was like "You know what, I'll buy it for now, see where it leads to, because it looks like something that will be huge as the story goes on."

I did like the symbolic parallels of Owen's and Auburn's situations though. Both of them suffered tragedies in their young lives, both of them being in situations where they were emotionally manipulated because of their connections (Owen with his father, Auburn with her former love's family - I won't spoil much more than that to keep this review mostly spoiler free.) I understand that both of them are young and while their decisions in the mix of these heavy situations are infuriating, they have context. I could understand that. But even then, I felt the narrative was only skimming the surface of these situations, that it was doing more telling than showing.

Over halfway through the novel, I think Hoover said it was time to have some of these plot points resolve themselves in twist scenarios, and honestly that was the point where a lot of the narrative setup (which had been mostly gradual) showed its uneven presentation.

Because of the time gaps and circumstances in the story, Owen and Auburn's relationship really had little time to gain fire despite some of their connections. And then the scenario which was used to justify Auburn's decision to stay away from Owen felt emotionally manipulative because of the lacking development and time given to the situation. It could've been much more resonant in portrayal, but that's not my only quibble. Eventually the situation turns to a "technically" cheating relationship, which then leads to situations that are definitely emotionally manipulative from a reading perspective.

I found it very hard to recover from reading an intimate love scene (in which Owen shows his tendency to be like every single one of Hoover's heroes and tells the heroine how he MAKES her feel and what SHE deserves) to a graphic sexual assault/near rape scene, and then back to a very intimate love scene again.

Okay to me, that was clear melodrama, not the resonant fear/anguish/tough situation that it was meant in and of itself. Mostly because it was revealed in such little time and close to the end of the book that it really didn't have much time to digest for what it offered (plus, TRIGGER WARNING). While I was glad for Emory's presence (though unfortunately, her role in the story seemed mostly to justify the relationship between Owen and Auburn) and I liked how Auburn stood up for herself in the end, it still felt like much of this stuff wouldn't have happened if she hadn't met Owen.

Which brings me to the last chapter of the book, and by that point, I was just done. Turns out that

Owen knew her all along, and this was hinted at in turns of the book, so it wasn't unexpected, but I hoped it wouldn't go that route. It was a one-sided relationship of destined loves, I think. Adam had met Owen and made one last request to give Auburn a painting which had his dying wish coupled with Owen's art.

While some might find that emotionally jarring, I couldn't help but feel like the delivery didn't match the set-up. The characters weren't vetted enough for that to hit home.

Plus, I got deja-vu of the same narrative formula as "Hopeless" - which completely ruined the book for me because it felt like "similar script, different cast."

So, in the end, I couldn't buy into the narrative's emotion or heart. Hoover's narratives are starting to repeat for me, and I'd like to move to something that feels more realistic and less on the side of melodrama meant to supposedly shock me, when it isn't shocking at all, just another color of a work she's already done.

That's really all I can say about it.